watch 00:59
The Loop (Movies)
Do you like this video?
Jack Ryan: Shadow Recruit 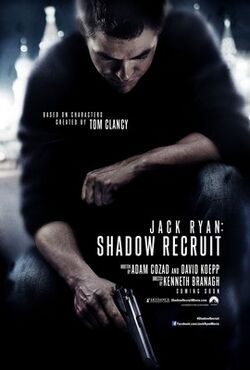 Jack Ryan: Shadow Recruit is a 2014 American action thriller film, directed by and co-starring Kenneth Branagh. Chris Pine, Kevin Costner and Keira Knightley star in leading roles. The film features the fictional Jack Ryan character created by author Tom Clancy. It is the fifth film in the Jack Ryan series which is presented as a reboot that departs from the previous installments. Unlike its predecessors, it is not an adaptation of a particular Clancy novel, but rather an original story. Pine stars in the title role, becoming the fourth actor to play Ryan, following Alec Baldwin, Harrison Ford, and Ben Affleck.

The film was a co-production between the motion picture studios Skydance Productions, di Bonaventura Productions, Mace Neufeld Productions, Buckaroo Entertainment, Etalon Film and Translux. Theatrically, it was distributed by Paramount Pictures and was released on January 17, 2014. In the home-video market, the film is scheduled for a Blu-ray disc release on June 10.

On February 4, 2014, the original motion picture soundtrack was released by the Varèse Sarabande music label in CD format. The soundtrack was composed and orchestrated by Patrick Doyle. For its theatrical run, the film had grossed over $130 million in revenue at the box office. Jack Ryan: Shadow Recruit was met with mixed critical reviews. The film is dedicated to Clancy, who died on October 1, 2013.

After the events of 9/11, Jack Ryan (Pine), studying at the London School of Economics, becomes a US Marine second lieutenant fighting in Afghanistan, where he is critically injured when his helicopter is shot down. During a lengthy rehab, he attracts the attention of Dr. Cathy Muller (Knightley), a physician, and Thomas Harper (Costner), an official with the CIA.

Ten years later, Ryan is working on Wall Street with a cover job as a compliance officer at a stock brokerage, and as a covert CIA analyst, looking for suspect financial transactions that would indicate terrorist activity. When the Russian Federation loses a key vote before the United Nations, Ryan notices that the markets do not respond in the expected way. He discovers that trillions of dollars held by Russian organizations have disappeared. A large number of these funds are controlled by Viktor Cherevin (Branagh), a Russian tycoon.

Ryan's employer conducts business with Cherevin, so when Ryan discovers certain accounts are inaccessible to him as auditor, he has reason to visit Moscow and investigate. On arrival he narrowly survives a murder attempt by an assassin posing as his bodyguard. Ryan sends an SOS and is surprised to learn his backup is Harper. During their debrief, Ryan explains how Cherevin's shadow investments could make the United States vulnerable to financial collapse following a staged terrorist attack, which would also weaken global markets.

At his meeting with Cherevin the next day, he is told that the problem company and all of its assets have been sold, thus stopping Ryan's audit. Meanwhile, Ryan's fiancée Muller, concerned he may be having an affair, secretly flies to Moscow to meet him. Against protocol for unmarried couples, Ryan reveals that he works for the CIA, to her great relief. Improvising on the situation, Harper has Muller agree to be included in a plan to infiltrate Cherevin's offices. Ryan and Muller meet Cherevin at an upscale restaurant across the street from Cherevin's office. Over dinner, Ryan causes a scene and purposely insults Muller. Excusing himself, he gains access to Cherevin's office where he downloads critical corruption files. Cherevin, alerted to Ryan's infiltration, abducts Muller. Ryan rescues her, but Cherevin maintains that Ryan cannot stop his plan.

Ryan and the CIA discover Cherevin used a falsified death certificate to place his son, Aleksandr (Utgoff), in the United States as a sleeper agent. Ryan uses his talent for pattern recognition to locate Aleksandr's hideout and intended target, Wall Street. He locates a bomb hidden in an improvised police response vehicle and gives chase. Unable to defuse it, he hijacks the vehicle and crashes it into the East River, killing Aleksandr and preventing the loss of any innocent life.

Ryan and Muller are reunited and discuss their future together. Muller decides to stay with him despite his career and the risks he has to take. Cherevin is executed by his co-conspirators in Russia, while Ryan, now married, and Harper are called to the White House to brief the president. 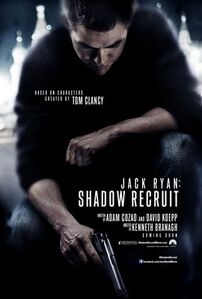 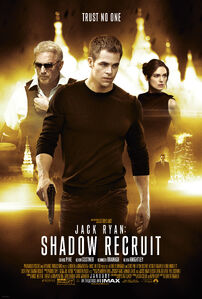 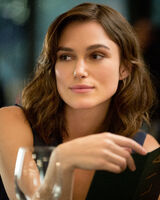 Retrieved from "https://movies.fandom.com/wiki/Jack_Ryan:_Shadow_Recruit?oldid=239201"
Community content is available under CC-BY-SA unless otherwise noted.