Start a Wiki
watch 16:45
The Loop (Movies)
Do you like this video?
Jack and Diane 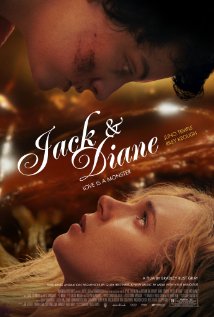 Jack and Diane is a 2012 American film written and directed by Bradley Rust Gray, and starring Juno Temple and Riley Keough. Diane's feelings for Jack -- the girl she met over the summer -- begin to manifest themselves in terrifying ways when she learns that her friend will soon be moving away.

Jack and Diane, two teenage girls, meet in New York City and spend the night kissing ferociously. Diane’s charming innocence quickly begins to open Jack’s tough skinned heart. But when Jack discovers that Diane is moving she pushes her away. Unable to grasp her new feelings, Diane's emotions begin to cause unexplainable violent changes to her body. Through these awkward and insecure feelings, the two girls must struggle to turn their first love into an enduring one.


Retrieved from "https://movies.fandom.com/wiki/Jack_and_Diane?oldid=119377"
Community content is available under CC-BY-SA unless otherwise noted.