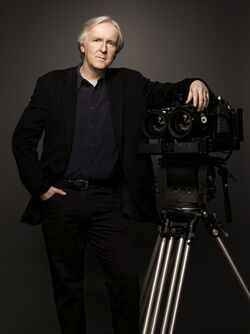 James Francis Cameron (born August 16, 1954) is a Canadian film director, film producer, screenwriter, editor, environmentalist and inventor. He is noted for his action/science fiction films, which are often highly successful financially and innovatively. Thematically, James Cameron's films generally explore the relationship between man and technology. Cameron also directed the film Titanic, which went on to become the top-grossing film of all time, with a worldwide gross of over US$1.8 billion; he also created The Terminator franchise.

James Cameron was born in Kapuskasing, Ontario, Ontario, Canada, to Phillip, an electrical engineer, and Shirley Cameron, an artist. He grew up in Chippawa, Ontario, and in 1971 his family moved to Brea, California. There he studied physics at Cal State-Fullerton, but his passion for filmmaking would draw him to the film archive of UCLA at every opportunity. After seeing the film Star Wars, Cameron quit his job as a truck driver to enter the film industry. [1]

He started in the film industry as a screenwriter, then moved into art direction and effects for films such as Battle Beyond the Stars and Escape from New York. Working with producer Roger Corman, Cameron landed his first directorial job in 1981 for the film Piranha II: The Spawning, shot at Grand Cayman Island for the underwater diving sequences, and in Rome, Italy for most of the interior scenes. He was originally hired as the special effects director (and his hand in story-writing can be suspected under the H. A. Milton pseudonym on the original script), and took over the direction when the original director left.

Cameron received the Bradbury Award from the Science Fiction and Fantasy Writers of America in 1991 — but, being primarily thought of as a genre filmmaker, he did not receive any major mainstream filmmaking awards prior to Titanic. With Titanic, Cameron received the Academy Awards for Best Editing (shared with Conrad Buff IV and Richard A. Harris), Best Picture (shared with John Landau), and Best Director.

In recognition of his contributions to underwater filming and remote vehicle technology, the University of Southampton awarded Cameron the honorary degree of Doctor of the University. Cameron received his degree in person at the graduation ceremony in July, 2004.

He has been nominated for six Academy Awards overall, and received half of them, three Oscars for Titanic. In total, Cameron's directorial efforts have grossed approximately US$2 billion in North America and US$6 billion worldwide. Without adjusting for inflation, Cameron's Titanic and Avatar are the two highest-grossing films of all time at over $2 billion and $2.78 billion respectively. In March 2011 he was named Hollywood's top earner by Vanity Fair, with estimated 2010 earnings of $257 million.

He also wrote early drafts of Spider-Man and X-Men and had input into Alien Nation. He is also credited with giving the Predator character the dreadlock-look, after sharing ideas with Stan Winston. His screenplay for A Crowded Room, a thriller about a person suffering from DID, eventually became a casualty of the long pre-production nightmare. A heavily-rewritten screenplay to The Crowded Room is currently being produced under the direction of Joel Schumacher.

He is also a member of the Mars Society.

He has been described by one collaborator, author Orson Scott Card, as selfish and cruel. When asked about working with Cameron on the novelization of The Abyss, Card said the experience was "Hell on wheels. He was very nice to me, because I could afford to walk away. But he made everyone around him miserable, and his unkindness did nothing to improve the film in any way. Nor did it motivate people to work faster or better. And unless he changes his way of working with people, I hope he never directs anything of mine. In fact, now that this is in print, I can fairly guarantee that he will never direct anything of mine. Life is too short to collaborate with selfish, cruel people."[3]

Cameron has a famously explosive temper. The (London) Independent compares him with the tyrannical Attila the Hun: "[T]he man is also, by all accounts, a nightmare to work with. Studios have come to fear his habit of straying way over schedule and over budget. He is notorious on set for his uncompromising and dictatorial manner, as well as his flaming temper - he's been called the film-making equivalent of Attila the Hun." [4]

Retrieved from "https://movies.fandom.com/wiki/James_Cameron?oldid=179929"
Community content is available under CC-BY-SA unless otherwise noted.