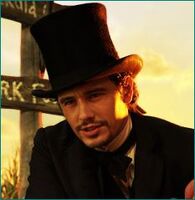 James Edward Franco (born April 19, 1978) is an American actor, director, screenwriter, producer, teacher, and author. He received an Oscar nomination in 2011 for his role in Danny Boyle's 2010 drama film 127 Hours, about real-life mountain climber Aron Ralston's struggle to free his hand from a boulder. Franco co-hosted the 83rd Academy Awards with Anne Hathaway in the same year. best known for portraying Harry Osborn in Spider-Man, Spider-Man 2, and Spider-Man 3.

Retrieved from "https://movies.fandom.com/wiki/James_Franco?oldid=159519"
Community content is available under CC-BY-SA unless otherwise noted.