watch 00:59
The Loop (Movies)
Do you like this video?
James Gunn 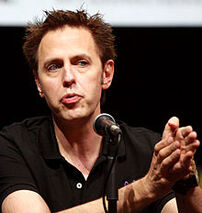 James Edwin Gunn (born August 5, 1970)[1] is an American writer, filmmaker, actor, musician and cartoonist. He is the older brother of actor Sean Gunn.

James Gunn was born in St. Louis, Missouri. He has four brothers, actor Sean Gunn, actor and political writer Matt Gunn, producer Patrick Gunn (formerly with Mosaic Media Group) and writer Brian Gunn, as well as one sister. Though the surname Gunn is usually Scottish, Gunn's name is from the Irish name MacGilGunn meaning "Sons to the Servants of the God of the Dead".[2]

Gunn began his career in filmmaking with Troma Entertainment, for whom he wrote the independent film Tromeo and Juliet. After contributing to several other Troma films, Gunn wrote, produced and performed in his own superhero comedy, The Specials, directed by Craig Mazin and featuring Rob Lowe, Thomas Haden Church, Paget Brewster, Judy Greer and Jamie Kennedy.

Gunn's first major Hollywood screenplay was Scooby-Doo in 2002. In 2004, he wrote the screenplay for the remake of George A. Romero's Dawn of the Dead, and Scooby-Doo 2: Monsters Unleashed. That same year he also executive produced, and starred in the mockumentary LolliLove, directed by and starring his then-wife Jenna Fischer. His directorial film debut was the 2006 horror-comedy Slither.

Gunn's next projects included the comedy short film Humanzee! which was originally intended exclusively for the Xbox Live's Horror Meets Comedy series of short comedy films by horror directors, it was replaced with Sparky and Mikaela which debuted on Xbox Live on December 31, 2008.[5][6][7] In an April 2009 interview on The Jace Hall Show, Gunn described Sparky and Mikaela as being "about a human racoon crime fighting team and they fight crime in both the forest world, among the furry animals, and in the human world".[8] Gunn also has a short form web series for Spike.com titled James Gunn's PG Porn[9] which made EW's The Must List.[10]

In 2008, James Gunn was one of the judges on the VH1 reality television show Scream Queens where 10 unknown actresses compete for a role in the film Saw VI, where he directed contestants during acting challenges.[11]

In 2009, Gunn announced he was going to write and direct Pets, a comedy about a man who is abducted by aliens who want to turn him into a household pet with Ben Stiller, Stuart Cornfeld and Jeremy Kramer producing.[12] However, by March 2009, Gunn announced, "PETS, unfortunately, is done. I'm gone. I left the project for various reasons. I hope it sees the light of day somehow, but it won't be with me attached as director."[13]

Outside of filmmaking and television, Gunn also penned a novel in 2000, The Toy Collector, and with Troma's President Lloyd Kaufman co-wrote All I Need to Know about Filmmaking I Learned from the Toxic Avenger, about his experiences with Kaufman while working at Troma. As a musician, Gunn released one album with his band, The Icons, Mom, We Like It Here on Earth.[14] He has written music for the films The Low Life, as well as for Scooby-Doo and Scooby-Doo 2.

Gunn wrote and directed the Marvel Studios adaptation of Guardians of the Galaxy which will be released on August 1, 2014.[16] His brother, Sean Gunn will have an "integral part" in the film.

Retrieved from "https://movies.fandom.com/wiki/James_Gunn?oldid=72610"
Community content is available under CC-BY-SA unless otherwise noted.