Start a Wiki
watch 01:16
The Loop (Movies)
Do you like this video?
James L. Brooks 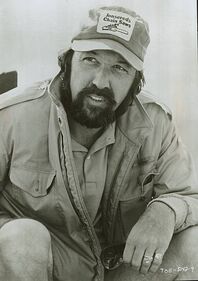 James Lawrence Brooks is an American director, producer and screenwriter. Before working in film, he created, among other TV shows, the Mary Tyler Moore show.

Brooks moved into feature film work when he wrote and co-produced the 1979 film Starting Over. His next project was the critically acclaimed film Terms of Endearment, which he produced, directed and wrote, winning an Academy Award for all three positions. Basing his next film, Broadcast News, on his journalistic experiences the film earned him a further two Academy Award nominations. Although his 1994 work I'll Do Anything was hampered by negative press attention due to the cutting of all of its recorded musical numbers, As Good as It Gets starring Jack Nicholson earned further praise. It was seven years until his next film, 2004's Spanglish. His sixth film, How Do You Know, was released in 2010. Brooks also produced and mentored Cameron Crowe on Say Anything... (1989) and Wes Anderson and Owen Wilson on Bottle Rocket (1996).

Retrieved from "https://movies.fandom.com/wiki/James_L._Brooks?oldid=73993"
Community content is available under CC-BY-SA unless otherwise noted.