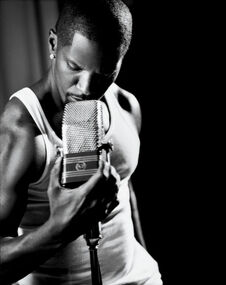 Foxx was born as Eric Marlon Bishop in Terrell, Texas, but was abandoned seven months after birth and raised by his mother's adoptive parents. He started his career as a stand-up comedian—he changed his name because he noticed female stand-up comics were usually called to the stage first at open-mic events, and he considered Jamie Foxx to be ambiguous enough to negate any sexual discrimination in that respect.

His first film role was in the comedy Toys, while his first dramatic role was in Any Given Sunday. His breakthrough role was in Collateral (directed by Michael Mann and starring Tom Cruise, while his next appearance in Ray won him a best actor Oscar. Following these successes, Foxx starred in Jarhead, Miami Vice, Dreamgirls, The Kingdom (with Chris Cooper), The Soloist, Law Abiding Citizen, Rio and Horrible Bosses (with Miami Vice film co-star Colin Farrell). Foxx won the Academy Award for Best Actor in the 2004 biopic Ray about music legend Ray Charles.

Foxx's television career began with In Living Color before securing a recurring role in the sitcom Roc. He also had his own sitcom called The Jamie Foxx Show. He has also had a substantial music career , releasing several albums and often working with other artists such as Kanye West.