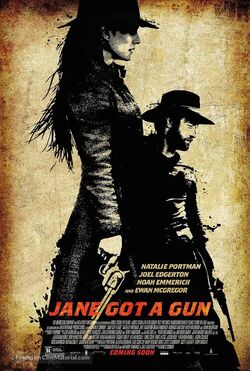 Panic strikes Jane Hammond (Natalie Portman) when her outlaw husband John returns to their farm with bullet wounds. Expecting the worst, she brings her young daughter to safety and travels to the home of Dan Frost (Joel Edgerton), a boozing ex-lover who may be her only hope. With Dan now on her side, Jane prepares for a showdown with the vengeful John Bishop and his gang of thugs. Looking to settle an old score, Bishop must now contend with the gun-toting Jane and her new partner.

Retrieved from "https://movies.fandom.com/wiki/Jane_Got_a_Gun?oldid=101122"
Community content is available under CC-BY-SA unless otherwise noted.