Moviepedia
Register
Don't have an account?
Sign In
Advertisement
in: 1969 births, Film producers from California, American people of Jewish descent,
and 5 more 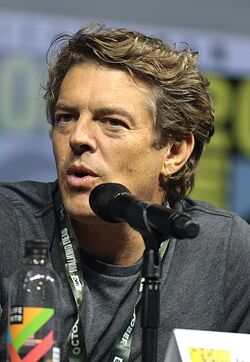 Jason Ferus Blum (born February 20, 1969) is an American film producer, and both the founder and CEO of eponymous company Blumhouse Productions. He won the 2014 Primetime Emmy Award for Outstanding Television Movie for producing The Normal Heart, and has received three nominations for the Academy Award for Best Picture for producing Whiplash, Get Out and BlacKkKlansman.

Blum worked for Bob and Harvey Weinstein as an executive producer and later as an independent producer for Warner Bros. He also was working as a producing director at Ethan Hawke's Malaparte theater company. Blum is a 1991 graduate of Vassar College.

He obtained financing for his first film as producer, Kicking and Screaming (1995), after receiving a letter from family acquaintance, entertainer Steve Martin, who endorsed the script. Blum attached the letter to copies of the script he sent around to Hollywood executives.

In 2000, he founded Blumhouse Productions, which specializes in producing micro-budget movies that give directors full creative control over the projects. Some of the films produced by Blum have been highly profitable, including horror film Paranormal Activity which was made for $15,000 and earned nearly $200 million. NPR's Planet Money did a special podcast about how Blum's production house gets its success.

Blum also produced Insidious (2010), Sinister (2012), The Purge (2013), and Creep (2014), all of which had successful sequels. In 2014, he served as an executive producer on the television film The Normal Heart, which went on to win the Primetime Emmy Award for Outstanding Television Movie, and produced the feature films Whiplash and Get Out, both of which earned him nominations for the Academy Award for Best Picture.

In 2018, Blum said in an interview that the reason no woman had ever directed one of his horror films was that "there are not a lot of female directors (...) and even less who are inclined to do horror". After much criticism on social media, in which lists of such directors were circulated, he apologized for what he called his "dumb comments".