Start a Wiki
watch 01:27
The Loop (Movies)
Do you like this video?
Jason Bourne 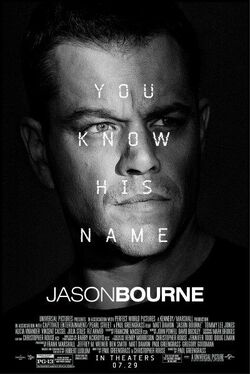 Jason Bourne (previously known as Bourne 5) is an upcoming American-German action spy thriller film directed by Paul Greengrass, produced by Greengrass and written by Greengrass and Christopher Rouse. It is the fifth film in the Bourne film seriesand the sequel to the 2007 film The Bourne Ultimatum and the 2012 film The Bourne Legacy. The film stars Matt Damon, Julia Stiles, Alicia Vikander, Vincent Cassel, and Tommy Lee Jones.

Principal photography on the film commenced on September 8, 2015. It is set to be released on July 29, 2016 by Universal Pictures. The title of the film was officially announced as Jason Bourne on February 7, 2016 during Super Bowl 50.[2]

Several years after his disappearance at the conclusion of The Bourne Ultimatum, Jason Bourne unexpectedly resurfaces at a time when the world is faced with unprecedented instability.

Retrieved from "https://movies.fandom.com/wiki/Jason_Bourne_(film)?oldid=97529"
Community content is available under CC-BY-SA unless otherwise noted.