Start a Wiki
watch 01:21
The Loop (Movies)
Do you like this video?
Javier Bardem 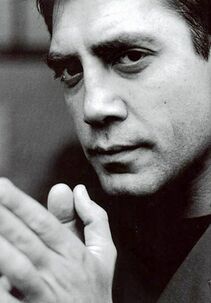 Javier Bardem is a Spanish actor most well known (to English-speaking audiences) for his appearances in No Country For Old Men, Biutiful, Vicky Cristina Barcelona (by Woody Allen), Eat Pray Love, and his breakthrough role, Before Night Falls.

Bardem is the youngest member of a family of actors that has been making films since the early days of Spanish cinema. He got his start in the family business at age six when he appeared in his first feature, El Pícaro (The Scoundrel). During his teenage years, he acted in several TV series, played rugby for the Spanish National Team, and toured the country with an independent theatrical group. Javier's early film role as a sexy stud in the black comedy Jamon Jamon by Pedro Almodóvar propelled him to instant popularity and threatened to typecast him as nothing more than a brawny sex symbol. Determined to avert a beefcake image, he refused similar subsequent roles and has gone on to win acclaim for his ability to appear almost unrecognizable from film to film.

With over 25 movies and numerous awards under his belt, it is Javier's stirring, passionate performance as the persecuted Cuban writer Reynalso Arenas in Before Night Falls (2000) that will long be remembered as his breakthrough role. He received five Best Actor awards and a Best Actor Oscar nomination for his portrayal of a strong-willed man who survived censorship, imprisonment, and homosexual intolerance for the privilege to write freely, only to commit suicide at age 47 in New York, ending a battle with AIDS.

In 2010 he married fellow Spanish actress Penelope Cruz. He will next be seen as the villain in the James Bond film Skyfall.

Retrieved from "https://movies.fandom.com/wiki/Javier_Bardem?oldid=88101"
Community content is available under CC-BY-SA unless otherwise noted.