View src
watch 01:33
Wiki Targeted (Entertainment)
Do you like this video?
Play Sound
Jaws: The Revenge 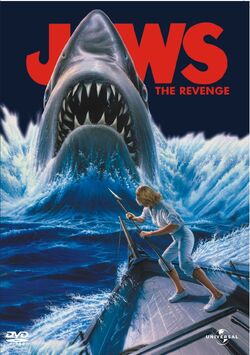 Jaws: The Revenge is a 1987 American horror thriller film and the fourth and last instalment in the Jaws franchise, however Universal largely ignored Jaws 3D in press releases, citing "Jaws: The Revenge" as the third film in a trilogy. In its DVD release, the film was later marketed by Universal as "Jaws 4: The Revenge".

The film was panned by critics and holds a rating of 0% on Rotten Tomatoes, it commercially failed at the box office and is considered one of the worst movies of all time, making it is the worst reviewed film and least performance at the box office in the franchise. On January 2nd 1988, This movie won at the CVF Awards for Worst Picture, Worst Actor (Lance Guest), Worst Actress (Lorraine Gray), Worst Supporting Actor (Mario Van Peebles), Worst Supporting Actress (Karen Young), Worst Director and Worst Screenplay.

On Amity Island, sheriff Martin Brody (Roy Scheider), the hero of two previous shark attacks has died from a heart attack. His wife, Ellen Brody (Lorraine Gary), thinks it was from the fear of sharks.

She now lives with Brody's younger and more obedient son Sean (Mitchell Anderson) and his fiancée Tiffany (Mary Smith). Sean works as a police deputy and is sent to clear a log from a buoy a few days before Christmas. As he does so, a massive great white shark bursts out of the water, severing his arm, pulls him under the surface and drowns him, sinking his boat in the process. Sean's calls for help are drowned out by the Christmas choir.

Ellen is convinced that the shark intentionally targeted Sean with a vengeance. Brody's older son Mike (Lance Guest), his wife Carla (Karen Young) and their 5-year-old daughter Thea (Judith Barsi) come to Amity for the funeral and encourage her to come to the Bahamas with them.

One day, the same shark that attacked Sean unexpectedly appears and attempts to devour their boat. Jake is eager to do research on the shark, but Michael asks him to keep quiet about the shark's presence due to Ellen's attempts to convince him to find a job on land. Ellen becomes so obsessive that she starts having nightmares of being attacked by a shark. Then she starts getting psychic feelings when the shark is near or attacks.

Ellen and the shark seem to share a strange connection that is unexplained. The crew decides to attach a device to the shark that would track its heartbeat. Using chum to attract it, Jake stabs the device's tracking pole into the side of the shark. The next day, Mike is chased by the shark and barely manages to escape unharmed.

Thea goes on an inflatable banana boat with her friend Margaret and her mother. The shark goes for Thea, but it attacks and kills Margaret's mother instead. Thea and Carla are traumatized following the attack. Ellen boards Jake's boat to track down the shark, intending to kill it to save the rest of her family.

Mike arrives at his house, and after hearing about what happened, he lets it slip about the shark, which greatly angers Carla. Mike and Jake are flown by Hoagie to search for Ellen and find the shark in pursuit of their boat (which Ellen has hijacked).

During the search, Hoagie explains to Mike about Ellen's theory that the shark that killed Sean has followed her to the Bahamas to get revenge on the Brodys. When they finally find her, Hoagie lands the plane on the water, ordering Mike and Jake swim to the boat as the shark drags the plane and Hoagie underwater.

Much to Ellen's disbelief, Hoagie survives. Mike is upset with Ellen because he was worried that she would have been killed by the shark. Jake and Mike hastily put together an explosive powered by electrical impulses. They begin blasting the shark with the impulses, which begin to drive it mad; it repeatedly jumps out of the water, roaring in pain.

As Jake moves to the front of the boat, the shark lunges, giving it the chance to pull Jake under and maul him. He manages to get the explosive into the shark's mouth before he is taken underwater. Mike continues to blast the shark with the impulses, causing it to leap out of the water again, igniting the bomb as Ellen steers the sailboat towards the shark while thinking back to Sean's demise, the shark's attack on Thea, and her husband's battle with the first shark.

The broken bowsprit impales the shark, causing it to explode. Mike then hears Jake calling for help, seriously injured, but alive and conscious, floating in the water. The four survive the harsh encounter and make it back to land. Hoagie then flies Ellen back to Amity Island.

No reference is made to the character development or events depicted in Jaws 3-D. In its predecessor, Michael is an engineer for SeaWorld, whereas here he is a marine research scientist. Sean is not associated with the police force in Jaws 3-D, and there is no mention of their respective partners. One of the Universal Studios press releases for Jaws: The Revenge omits Jaws 3-D by referring to Jaws: The Revenge as the "third film of the remarkable Jaws trilogy.

The special effects team, headed by Henry Millar, had arrived at South Beach, Nassau on January 12, 1987, almost a month before principal photography commenced there. In the official press release, Millar says that when he got involved "we didn't even have a script... but as the story developed and they started telling us all what they wanted... I knew this wasn't going to be like any other shark anyone had ever seen."

The shark was to be launched from atop an 88-foot (27 m) long platform, made from the trussed turret of a 30-foot (9.1 m) crane, and floated out into Clifton Bay. Seven sharks, or segments, were produced.

Two models were fully articulated, two were made for jumping, one for ramming, one was a half shark (the top half) and one was just a fin. The two fully articulated models each had 22 sectioned ribs and movable jaws covered by a flexible water-based latex skin, measured 25 feet (7.6 m) in length and weighed 2500 pounds. Each tooth was half-a-foot long and as sharp as it looked. All models were housed under cover... in a secret location on the island.

The film company returned to Universal Studios to finish shooting on April 2. Principal photography was completed in Los Angeles on May 26. Millar's special effects team, however, remained in Nassau, completing second unit photography on June 4.

In the ending that was originally filmed, Ellen rammed the shark with Michael's boat, mortally wounding it. The shark then causes the boat to break apart with its death contortions, forcing the people on the boat to jump off to avoid going down with it. Test audiences disapproved of this ending. A new ending was shot with the shark getting stabbed with the bow sprit and then exploding; and with Jake being found wounded but alive. According to Orange Coast, the magazine of Orange County, reshooting the ending prevented Michael Caine from collecting his Academy Award for Hannah and Her Sisters. One version can be seen on cable broadcasts, while the other version is featured on the home releases.

Jaws The Revenge was the first film of the series to be released on DVD. It was released on Region 1 as a 'vanilla' disc by Goodtimes, featuring Spanish and French subtitles. The feature is presented in a non-anamorphic 2.35:1 widescreen transfer. The soundtrack was presented in Dolby Digital 4.1, with one reviewer saying that the "stereo separation is great with ocean waves swirling around you, the bubbles going by during the scuba scenes, and Hoagie's airplane flying around behind you." The same reviewer praised the image transfer of Mcpherson's "extremely well photographed" cinematography. The film was re-released on DVD by Universal on June 3, 2003 in an anamorphic transfer.