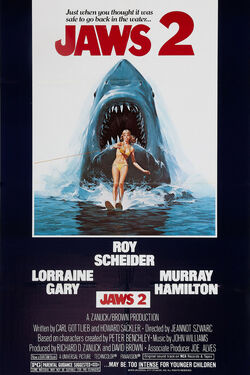 Just when you thought it was safe to go back in the water...
Directed By
Jeannot Szwarc
Produced By
Written By
Cast
Edited By
Cinematography
Michael Butler
Music By
John Williams
Distributed By
Universal Pictures
Country

Jaws 2 or (Jaws II) is a 1978 American horror thriller film and the first sequel to Steven Spielberg's Jaws (1975), and the second installment in the Jaws franchise, which was based on Peter Benchley's novel of the same name. Directed by Jeannot Szwarc, it stars Roy Scheider as Police Chief Martin Brody, who must deal with another great white shark terrorizing the waters of Amity Island, a fictional seaside resort, with Lorraine Gary and Murray Hamilton reprising their respective roles as Martin's wife Ellen Brody and mayor Larry Vaughn.

Like the first film, the production was troubled, resulting in some flaws by critics. Many fans consider this the best sequel in the film line, followed by 1983's Jaws 3D and 1987's Jaws: The Revenge.

Jaws 2 remained on Varietys's list of top ten box office hits of all time until the mid-1990s, and was briefly the highest-grossing sequel in history until Star Wars Episode V: The Empire Strikes Back was released in 1980. The film's tagline, "Just when you thought it was safe to go back in the water...," has become one of the most famous in film history and has been parodied and homaged several times. It is widely regarded as being the best Jaws sequel.

Jaws 2 is considered the best sequel in the franchise before it was followed by Jaws 3-D and Jaws: The Revenge, released in 1983 and 1987, respectively.

Two divers are photographing the wreck of the Orca, Quint's boat from the first film. They are suddenly attacked and killed by a large great white shark, but not before one of the divers' camera gets a photo of the shark's profile. The shark later prowls the coastal waters of Amity Island, killing a female water skier. The female driver of the speedboat tries to defend herself by first throwing a gasoline tank at the shark (accidentally spilling some on herself) and then igniting the fuel with a flare gun. The fire ignites the gas tank and the speedboat explodes, killing the driver and leaving the shark heavily scarred on the right side of his head. In addition to these incidents, a dead killer whale is beached at a nearby lighthouse with large wounds all over its body, which Police Chief Martin Brody suggests were caused by a great white shark. Once again, Mayor Vaughn doesn't share Brody's belief that the town has another shark problem and warns him not to do something hasty. Later, Brody spots a section of a ruined speedboat bobbing in the surf just off the beach. When he goes to retrieve it, he encounters the burnt remains of the female speedboat driver. Brody angrily grounds his son Mike because of his reluctance to find a summer job, preferring to go sailing every day, and gives him a job at the beach. The following day, while Brody is in an observation tower, he sees a large shadow produced by a school of bluefish, which he mistakes for a shark. In his haste, Brody orders everyone out of the water and fires his gun, causing a panic. Later that evening, he receives the photo of the shark's eye, taken by one of the attacked divers. Brody shows it to Vaughn and his townsmen, but they refuse to accept the evidence put in front of them. Len Peterson (who has built a new resort in Amity to attract people) and the town council fire Brody for the beach incident, with Mayor Vaughn being the only one to vote against dismissal, and promote Deputy Hendricks to Brody's position. The next morning, Mike sneaks out and goes sailing with his friends, but has to take his young brother Sean along to stop him telling his parents about Mike's trip. Later, they go past a group of divers led by Tom Andrews. Tom encounters the shark minutes after entering the water to catch lobsters and escapes, but suffers an embolism due to rushing to the surface too fast. Tina and Eddie later encounter the shark when he smashes into their sailboat, devouring Eddie and leaving Tina terrified and alone. Brody and his wife Ellen find the panicked diver being put into an ambulance, and Brody suspects that something must have scared him to make him come up so fast. Hendricks informs Brody that Mike has gone out sailing to the lighthouse with his friends, so Brody insists on taking the police launch to rescue them, with Ellen and Hendricks both joining him. They find Tina's boat, with Tina hiding in the hull, who confirms Brody's suspicions about the shark in the area. Hendricks and Ellen take Tina ashore in a passing boat, while Brody continues to search for the teenagers using the police launch. All seems well with the other teenagers, until the shark appears, smashing into one of their sail boats, causing panic and their boats to collide with each other. Mike is knocked unconscious and is pulled out of the water just as the shark appears; two friends take him back to the shore for help. The rest of the teens remain floating on the wreckage of tangled boats, drifting out toward the open sea. A Harbor Patrol marine helicopter arrives and a line is rigged to tow the boats to shore, but before the pilot can tow them, the shark attacks the chopper causing it to crash into the water. Sean also falls into the water, but is quickly saved by Marge. As Marge tries to get back into the boat, her hands slip on the wet hull, and she falls back into the water. The shark approaches and devours Marge. Back at mainland, Tina is sent to the hospital, and Ellen berates Peterson for getting Brody fired and denying the shark's presence. Brody encounters Mike, who informs his father about the situation. Sean and his friends are drifting on the wreckage toward Cable Junction, a small rocky island housing an electrical relay station (with the open sea beyond it). Brody quickly finds the teenagers, but the shark attacks again, which causes Brody to run his boat aground on the rocks. Brody tries to tie a rope line, but snags an underwater power cable instead. Most of the teenagers are tossed into the water during the shark's next attack, and they swim to safety on Cable Junction, but the shark injures Lucy. Using an inflatable raft, Brody gets the shark's attention by pounding the power line with an oar, and gets the shark to bite the power cable. The plan succeeds, the shark gets electrocuted and sinks to the bottom of the sea, dead. Brody collects Sean and Jackie and paddles over to Cable Junction, to await rescue with the other teenagers.

Retrieved from "https://movies.fandom.com/wiki/Jaws_2?oldid=112051"
Community content is available under CC-BY-SA unless otherwise noted.