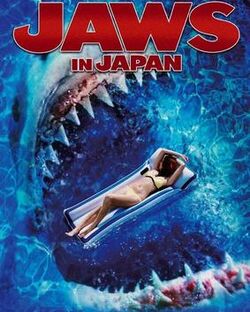 Jaws in Japan (aka Psycho Shark) is a 2009 Japanese horror film directed by John Hijiri, written by Yasutoshi Murakawa and stars Nonami Takizawa, Airi Nakajima, and Megumi Haruno. The movie was named so in an attempt to market it as a sequel to Jaws, but has no connection with it and has received extremely negative reviews.

On the coast off Sunny Beach, a private beach on a tropical island, a huge shark is waiting for his prey. Beautiful young college students Miki and Mai arrive on the island but are unable to find a hotel in which to stay. Both the young women find out that something is seriously wrong.

The film was not rated by the Motion Picture Association of America. In both the United Kingdom and the Republic of Ireland, it has a 12A certificate, meaning that it is not recommended that children under the age of twelve watch it unless they are accompanied by an adult.

Retrieved from "https://movies.fandom.com/wiki/Jaws_in_Japan?oldid=131191"
Community content is available under CC-BY-SA unless otherwise noted.