watch 00:59
The Loop (Movies)
Do you like this video?
Jay and Silent Bob Strike Back 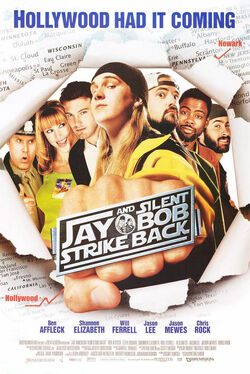 Jay and Silent Bob Strike Back is a 2001 American comedy film directed, written by, and starring Kevin Smith as Silent Bob, the fifth to be set in his View Askewniverse , a growing collection of characters and settings that developed out of his cult favorite Clerks . It focuses on the two titular characters, played respectively by Jason Mewes and Smith.

The film features a large number of cameo appearances by famous actors, actresses, and directors.

The title and logo for Jay and Silent Bob Strike Back are direct references to the second-released Star Wars film, The Empire Strikes Back.

Smith originally intended for it to be the last film set in his View Askewniverse, or to feature Jay and Silent Bob. Five years later, Smith reconsidered and decided to continue the series with Clerks II​, resurrecting Jay and Silent Bob in supporting roles. Smith has also decided to make another sequel to Clerks, and as of 2013 is in development.

After getting a restraining order from Randal Graves for selling drugs outside the Quik Stop, Jay and Silent Bob find out from Brodie Bruce that Bluntman & Chronic, the comic book based on their likenesses, has been adapted into a film in production by Miramax Films. In response, the two visit Holden McNeil, one of the writers of Bluntman and Chronic, and demand that he give them the royalties of the film. However, Holden tells Jay and Silent Bob that he sold his part of the creative and publishing rights of the comic over to his former friend Banky Edwards. Upon learning of the film, as well as the negative reaction it has received so far on the Internet, the two set out on a quest to Hollywood  , to prevent the film from being made and tainting their image, or at the very least receive the money from the royalties owed to them.

On the way, they befriend an animal liberation group, consisting of four women: Justice, Sissy, Missy, and Chrissy; and one man, Brent, who they had picked up for the cause. It is revealed that the organization is a front; Brent is a patsy, intended as a diversion by freeing an animal from a testing laboratory while the girls rob a diamond depository nearby. Jay tricks Brent and throws him out of the van in order to get closer to Justice, with whom he is smitten. Justice, who becomes close to Jay and Silent Bob (particularly the former), reluctantly accepts the two as the new patsies.

While the girls are robbing the diamond depository they accidentally set off the alarm, prompting them to break the glass and steal the diamonds. While this is going on Jay and Silent Bob free the animals and take an orangutan named Suzanne with them. They escape outside to see the police arriving and the van exploding, which they believe has killed the girls.

Jay then takes the orangutan with him as a memorial to Justice. Quickly afterwards, Federal Wildlife Marshal Willenholly (whose name is taken from the three characters in the tv show Land of the Lost: Marshal, Will and Holly) shows up at the scene. Blinded to the diamond heist, he claims to have jurisdiction because of the large number of animals that escaped. He learns that all the animals have been recovered except for the orangutan. The officers then find and watch footage of a video Sissy recorded of Jay making remarks about "the clit, claiming to be "the Clit commander." Jay, however, was unaware that CLIT is an acronym for Coalition for the Liberation of Itinerant Tree-Dwellers, the name of the organization that Justice is a part of. Willenholly blindly finds this as an act of terrorism and calls for police support to hunt down what he considered "the two most dangerous men on the planet."

When the officers later have the trio cornered inside a diner and threaten to open fire, Jay and Silent Bob dress the orangutan as a child and walk out, claiming that they want to get their "son" out of the danger zone. Willenholly, thinking about the political repercussions of arresting a gay couple , decides to let them leave, but he quickly realizes his mistake and resumes the chase. When they jump into a sewer system, only Willenholly himself follows them while the other police officers, led by the Sheriff, leave him, and he is soon tricked into jumping off of a dam.

Having escaped the law, Jay and Silent Bob once again return to their quest to reach Hollywood, only to have Suzanne taken by a Hollywood animal acting agency car. Now on a quest to get their ape back and to clear their names, the two once again embark to Hollywood.

On their arrival in Hollywood, the two find themselves in the background of an E! News  newscast (ironically about their threat against Miramax on the Internet) that Justice is watching. While Justice takes the diamonds and goes to Hollywood to set things right, Marshal Willenholly learns of their mission to reach Hollywood and leaves to find them.

After a long chase with studio security and reclaiming Suzanne from a fictional Scream 4 in production, Jay and Silent Bob end up in Jason Biggs and James Van Der Beek's dressing room, where they quickly realize that these are the actors that will play the roles of Bluntman and Chronic, next to Jay and Silent Bob. Suzanne beats both of them up effortlessly and Jay and Silent Bob assume the roles of their characters, Bluntman and Chronic. Being forced into their costumes and thrown on stage with racist director Chaka Luther King, they must engage in a duel with Mark Hamill playing a comic book supervillain called Cock-Knocker, eventually taking a break from the scene when Willenholly interrupts to capture Jay and Silent Bob. Justice arrives on the scene, much to the surprise of Jay and Silent Bob. Justice tells them that the CLIT organization was not real and that the two were used as a distraction for the robbing of the jewels. Justice also admits that she, along with Missy, Sissy and Chrissy, were in fact jewel thieves. As Justice's former jewel thief team arrives, a climactic final battle ensues, after which Jay and Silent Bob get their royalties to the film from Banky, and Justice turns herself and her former team in to Willenholly in exchange for a shorter sentence and letting Jay and Silent Bob go.

The film ends with Jay and Silent Bob spending their royalty money on airplane tickets to find everybody who expressed negative opinions on the internet about the movie and characters, ranging from kids to clergy, and traveling to their towns to beat them up. The scene then cuts to everyone leaving a movie theater, having just watched the Bluntman and Chronic movie and expressing negative reception: Hooper X calls the film a "one 90-minute-long gay joke." Jay and Silent Bob, with Justice and Willenholly, then go across the street to enjoy a performance from Morris Day and The Time.

After the credits, God closes the View Askewniverse book.

Retrieved from "https://movies.fandom.com/wiki/Jay_and_Silent_Bob_Strike_Back?oldid=301221"
Community content is available under CC-BY-SA unless otherwise noted.