watch 01:50
Wiki Targeted (Entertainment)
Do you like this video?
Play Sound 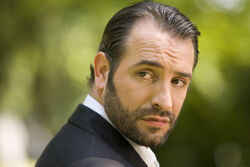 Jean Dujardin (19 June 1972) is a French actor and comedian best known for the OSS 117 series of spy parodies and for the critically-acclaimed 2011 silent film The Artist.

He has never been nominated for an Oscar, but it's predicted that he will be nominated for Best Actor for his role in The Artist.

Retrieved from "https://movies.fandom.com/wiki/Jean_Dujardin?oldid=28324"
Community content is available under CC-BY-SA unless otherwise noted.