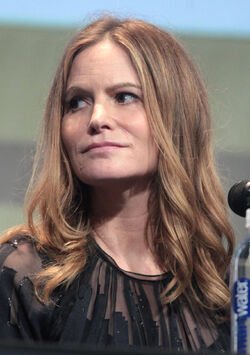 Jennifer Jason Leigh (born Jennifer Leigh Morrow; February 5, 1962) is an American actress. She began acting on television during the 1970s, guest-starring on several television shows. Her film breakthrough came in 1982 for her performance as Stacy Hamilton in Fast Times at Ridgemont High. Leigh continued performing past her teen years, receiving critical praise for her roles in the 1990 films Miami Blues and Last Exit to Brooklyn. In 1991, she appeared in Ron Howard's Backdraft, and in 1992, she acted in the drama-thriller Single White Female.

In 2002, Leigh appeared in the crime drama Road to Perdition. In 2007, she starred in the comedy Margot at the Wedding, which was directed by her then-husband, Noah Baumbach. She had a recurring role on the Showtime comedy-drama series Weeds as Jill Price-Gray. In 2015, she received critical acclaim for her voice work as Lisa in Charlie Kaufman's Anomalisa, and for her role as Daisy Domergue in Quentin Tarantino's The Hateful Eight, for which she was nominated for the Golden Globe, Critics' Choice, BAFTA and the Academy Award for Best Supporting Actress.

For her stage work, Leigh was nominated for a Drama Desk award for her Off-Broadway performance as Beverly Moss in Mike Leigh's Abigail's Party. Her Broadway debut occurred in 1998, when she became the replacement for the role of Sally Bowles in Cabaret.

Leigh was born in Hollywood, California. Her father, Vic Morrow (born Victor Morozoff), was an actor, and her mother, Barbara Turner, was a screenwriter. Her parents divorced when she was two. Leigh's birth name was Jennifer Leigh Morrow. She changed her surname early in her acting career, taking the middle name "Jason" in honor of actor Jason Robards, a family friend. Leigh's parents were Jewish, and their families were from Russia and Austria, respectively.

Leigh is the middle child of three sisters. Her older sister, Carrie Ann Morrow, who was credited as a "technical advisor" on her 1995 film Georgia, died in 2017. Leigh also has a half-sister, actress Mina Badie (born 'Badiyi' - from her mother's second marriage). Badie acted alongside Leigh in The Anniversary Party. Director Reza Badiyi became Leigh's stepfather when he married Leigh's mother, Barbara.

Leigh worked in her first film at the age of nine. It was a nonspeaking role for the film Death of a Stranger (The Execution) (1973). At 14, Leigh attended acting workshops, taught by Lee Strasberg, at the Stagedoor Manor Performing Arts Training Center in Loch Sheldrake, New York. Afterwards, she landed a role in the movie The Young Runaways (1978). She also appeared in an episode of Baretta and an episode of The Waltons. Several TV movies followed, including a portrayal of an anorexic teenager in The Best Little Girl in the World, for which Leigh dropped to 86 pounds (39 kg) under medical supervision. She made her big screen debut playing a blind, deaf, and mute rape victim in the 1981 slasher film Eyes of a Stranger, which she quit school to star in.

In 1982, Leigh played a teenager who gets pregnant in the Cameron Crowe-scripted high school comedy Fast Times at Ridgemont High, which served as a launching pad for several of its young stars. While decrying the writing as sexist and exploitative, Roger Ebert was enthusiastic about the acting, singling out Leigh and writing, "Don't they know they have a star on their hands?" With the exception of Ridgemont High and a supporting role in the Rodney Dangerfield comedy Easy Money, Leigh's early film work consisted of playing fragile, damaged or neurotic characters in low-budget horror or thriller genre films. She played a virginal princess kidnapped and raped by mercenaries in Flesh + Blood (1985), an innocent waitress pursued by the psychopathic title character in The Hitcher (1986) (both films pitting her opposite Rutger Hauer), and a young woman on the verge of a nervous breakdown in Heart of Midnight (1989).

In 1990, Leigh made a significant career breakthrough when she was awarded New York Film Critics Circle Award for Best Supporting Actress and the Boston Society of Film Critics Award for Best Supporting Actress for her portrayals of two very different prostitutes: the tough streetwalker Tralala who is brutally gang-raped in Last Exit to Brooklyn, and Susie, a teenage prostitute who falls in love with ex-con Alec Baldwin in Miami Blues. Roger Ebert included Last Exit in his list of Best Movies of 1990, calling Leigh's performance brave,[14] though his review of Miami Blues was much less sympathetic, simultaneously criticizing Leigh's ability to play dumb roles and praising her ability to play smart roles. Entertainment Weekly, in a backhanded compliment, called her "the Meryl Streep of bimbos".

Leigh was then cast in her first mainstream Hollywood studio film, the firefighter drama Backdraft (1991), in which she played a more conventional role, the girlfriend of lead actor William Baldwin. Leigh found more success in the gritty crime drama Rush (1991), portraying an undercover cop who becomes a junkie and falls in love with her partner, played by Jason Patric. Her next film, Single White Female (1992), was a surprise box-office success, bringing Leigh to her largest mainstream audience yet, portraying a mentally ill woman who terrorizes roommate Bridget Fonda.

Leigh was awarded the MTV Movie Award for Best Villain and nominated for Chicago Film Critics Association Award for Best Actress. Leigh co-starred with Kathy Bates as a tormented, pill-popping woman hiding a history of childhood sexual abuse in the adaptation of Stephen King's novel Dolores Claiborne (1995). Leigh achieved her greatest acclaim in the role of Sadie Flood, an angry, drug-addicted rock singer living in the shadow of her successful older sister (Mare Winningham), in Georgia (1995). For the role, Leigh dropped to 90 pounds (41 kg) and sang all her songs live, including a rambling 8½-minute version of Van Morrison's "Take Me Back". Georgia was met with critical praise. James Berardinelli wrote, "There are times when it's uncomfortable to watch this performance because it's so powerful", and Janet Maslin of the New York Times described Leigh's "fierce, risk-taking performance and flashes of overwhelming honesty".

Throughout the 1990s, Leigh worked with many independent film directors. She worked with Robert Altman in Short Cuts (1993), playing a phone-sex operator, and Kansas City (1996), as a streetwise kidnapper. Leigh has expressed admiration for Altman and called him her mentor. In a change of pace from her "bad girl" roles, Leigh played the fast-talking reporter Amy Archer in the Coen Brothers' comic homage to 1950s comedy, The Hudsucker Proxy (1994). Leigh took her first lead role as the writer and critic Dorothy Parker in Alan Rudolph's film Mrs. Parker and the Vicious Circle (1994). She received a Golden Globe Award nomination and a National Society of Film Critics Award for Best Actress, as well as Chicago Film Critics Association Award for Best Actress and Fort Lauderdale Film Critics Best Actress Award.

In another change of pace, she starred in Agnieszka Holland's version of the Henry James novel Washington Square (1997), as a mousy 19th-century heiress courted by a gold digger. In 1998, she appeared alongside Campbell Scott in the Hallmark Hall of Fame television movie The Love Letter. In David Cronenberg's eXistenZ (1999), she played a virtual reality game designer who becomes lost in her own creation.

Leigh had a brief role as a doomed gangster's wife in Sam Mendes's Road to Perdition (2002) and costarred as Meg Ryan's brutally murdered sister in Jane Campion's erotic thriller In the Cut (2003). After a long period of avoiding prostitute roles, she played alongside Christian Bale as his prostitute girlfriend in the thriller The Machinist (2004). Mick LaSalle of the San Francisco Chronicle commented that "As the downtrodden, sexy, trusting and quietly funny prostitute, Leigh is, of course, in her element". Her performance as a manipulative stage mother in Don McKellar's film Childstar won her a Genie Award for Best Performance by an Actress in a Supporting Role in 2005.

After many years of wanting to be in a Todd Solondz movie, she appeared in Palindromes (2004). She also appeared in the psychological thriller The Jacket (2005), alongside Adrien Brody. Leigh appeared in the 2008 ensemble film Synecdoche, New York and has acted in two films written and directed by her then partner Noah Baumbach: Margot at the Wedding, co-starring Nicole Kidman, and Greenberg. Leigh has said that the roles were not specifically written for her, as Baumbach does not write roles with actors in mind. In 2009, Leigh was cast in the Showtime comedy-drama series Weeds, becoming a regular guest in the eighth season.

Leigh has received three separate career tributes: at the Telluride Film Festival in 1993, a special award for her contribution to independent cinema from the Film Society of Lincoln Center in 2002, and a week-long retrospective of her film work held by the American Cinematheque at Los Angeles's Egyptian Theatre in 2001.

In 1998, Leigh took on the lead role of Sally Bowles in Sam Mendes's Broadway revival of the musical Cabaret, succeeding Natasha Richardson who originated the role in Mendes's production. She succeeded Mary-Louise Parker in the lead role in Proof on Broadway in 2001. Her other theatrical appearances include The Glass Menagerie, Man of Destiny, The Shadow Box, Picnic, Sunshine, and Abigail's Party. In 2011, she played Bunny in the Broadway revival of House of Blue Leaves in New York City alongside Ben Stiller and Edie Falco.

Leigh filmed a role in Stanley Kubrick's final film Eyes Wide Shut (1999) as a grieving patient of Dr. Bill Harford (Tom Cruise) who declares her love for him after her father's death. Kubrick wanted to reshoot the scenes, but Leigh was unavailable due to scheduling conflicts with eXistenZ; instead her scenes were cut. Leigh was originally cast as Vincent Gallo's girlfriend in his self-directed film The Brown Bunny, and was apparently prepared to perform oral sex on Gallo as the script required. Leigh subsequently commented that "it just didn't work out" and the role was eventually played by Chloë Sevigny. In 1997, she was featured in Faith No More's music video for "Last Cup of Sorrow". She was selected as one of "America's 10 Most Beautiful Women" by Harper's Bazaar magazine in 1989 and served as a jury member at the 57th Venice International Film Festival in 2000.

In 1982, Leigh's father, Vic Morrow, was accidentally killed along with two child actors when a helicopter stunt went wrong during the filming of Twilight Zone: The Movie. Leigh and her sister filed a wrongful death lawsuit against Warner Bros., John Landis and Steven Spielberg. They settled out of court a year later and the terms of the settlement have never been made public.

Leigh has described herself as shy, introverted, and averse to Hollywood publicity and scandal. Speaking about her roles in smaller, independent films, she said, "I'd much rather be in a movie that people have really strong feelings about than one that makes a hundred million dollars but you can't remember because it's just like all the others."

She met independent film writer-director Noah Baumbach in 2001 while starring on Broadway in Proof. The couple married on September 2, 2005. Their son, Rohmer Emmanuel, was born on March 17, 2010. Leigh filed for divorce on November 15, 2010, in Los Angeles, citing irreconcilable differences. She sought spousal support as well as primary custody of the couple's son, with visitation for Baumbach. The divorce was finalized in September 2013.