Start a Wiki
watch 01:38
The Loop (Movies)
Do you like this video?
Jennifer Lawrence 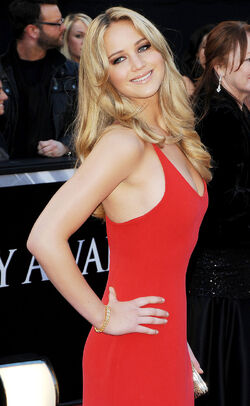 Jennifer Shrader Lawrence (born August 15, 1990 in Louisville, Kentucky) is an American actress, most famous for her role in Winter's Bone, for which she was she was nominated for an award - Best Actress in a Leading Role - making her the second youngest actress, 20 at the time, to receive an award, just behind Keisha Castle-Hughes. She also starred in X-Men: First Class, and is to appear in The Hunger Games as the lead role, Katniss Everdeen. She also is confirmed to have the deepest belly button out of any actress that has won an Oscar.

Retrieved from "https://movies.fandom.com/wiki/Jennifer_Lawrence?oldid=186788"
Community content is available under CC-BY-SA unless otherwise noted.