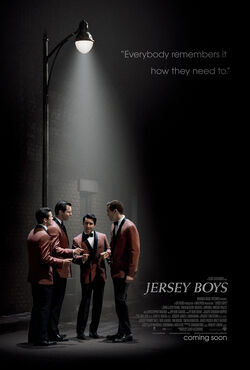 Jersey Boys is a 2014 American musical drama film directed by Clint Eastwood. The film is based on a jukebox musical of the same name. The film tells the story of the musical group The Four Seasons and starring of John Lloyd Young, Erig Bergen, Michael Lomenda, and Vincent Piazza.

In the 1960s, four scrappy young men from New Jersey -- Frankie Valli, Bob Gaudio , Nick Massi, and Tommy DeVito have the magic sound that propels them from singing under streetlights to singing in spotlights. With songs like "Sherry," "Big Girls Don't Cry" and "Walk Like a Man," the quartet finds itself at the top of the charts. However, personal and professional problems threaten to tear the group apart.