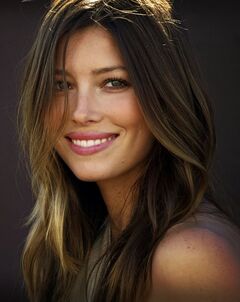 Jessica Claire Biel is an American actress, model, and singer. Biel is known for her television role as Mary Camden in the long-running family-drama series 7th Heaven. She has since starred in many films including The Texas Chainsaw Massacre (2003), Blade: Trinity (2004), I Now Pronounce You Chuck and Larry (2007), The A-Team (2010), New Year's Eve (2011), and Total Recall (2012).

Jessica Biel was born in Ely, Minnesota. Her mother, Kimberly, is a homemaker and spiritual healer. Her father, Jonathan Biel, worked for GE and was also an entrepreneur and business consultant. She is of German, French, English, Irish and Choctaw ancestry and has a younger brother, Justin, born in 1985. Biel's family moved frequently during her childhood, living in Texas, Connecticut, and Woodstock, Illinois, before finally settling in Boulder, Colorado. While growing up, Biel played soccer] and also trained as a gymnast. From 2000 to 2002, she attended Tufts University.

Biel initially trained to be a vocalist. At age nine, she appeared in several musical productions in her hometown, playing lead roles in productions such as Annie, The Sound of Music, and Beauty and the Beast. Biel was briefly in the a cappella choir the Tufts Amalgamates, but was later kicked out.

At twelve, Biel attended The International Modeling and Talent Association conference in Los Angeles where she was discovered and signed by the Judith Fontaine Modeling & Talent Agency. She began modeling for print advertisements, and appeared in commercials for products such as Dulux Paint and Pringles.

Biel also played the character Regrettal, a lead role in a low-budget musical short titled It's a Digital World. At fourteen, after auditioning for several television pilots, Biel was cast as Mary Camden, the second oldest child in the family drama 7th Heaven.

Biel landed her first feature film role as Peter Fonda's granddaughter in the critically acclaimed drama Ulee's Gold, released in 1997. Her performance earned her a Young Artist Award. In spring 1998, during a break from filming 7th Heaven, she starred in I'll Be Home for Christmas, playing the love interest of Jonathan Taylor Thomas.

When she posed topless in the March 2000 issue of Gear magazine, Biel sparked considerable controversy, as she was still under 18 at the time of the shoot. Producers of 7th Heaven were outraged, and brought legal action against Gear. She later stated that she regrets the Gear shoot but considers it a learning experience.

In 2001, Biel played the love interest of Freddie Prinze, Jr. in the baseball-themed film Summer Catch. The next year, she starred as promiscuous college student Lara in the ensemble film The Rules of Attraction, an adaptation of the Bret Easton Ellis novel.

Biel was cast in her first top-billing role in The Texas Chainsaw Massacre (2005). The film met with negative reviews but it was a commercial success, scoring the number-one spot in its opening week and going on to earn more than $80 million in the U.S. In 2003, Biel began work on the third installment of the Blade film series, Blade: Trinity. Almost immediately after finishing it in 2004, she headed to Australia to shoot the action-thriller Stealth.

Biel also made a cameo appearance in the 2004 film Cellular.Biel was cast in the role of Ellen Kishmore in the romantic comedy Elizabethtown. She then played the title character in the indie film London. In 2006, Biel played a turn-of-the-century duchess in the period piece The Illusionist, co-starring Edward Norton and Paul Giamatti.

Biel played an Iraq War veteran in the 2006 film Home of the Brave, a drama about soldiers struggling to readjust to society after facing the hardships of war. In Next, Biel played alongside Nicolas Cage and Julianne Moore. She then played in the summer comedy, I Now Pronounce You Chuck and Larry, co-starring Adam Sandler and Kevin James.

In late 2007, Biel signed on to play a stripper in Powder Blue, alongside Forest Whitaker (who also produced the film), Ray Liotta and Patrick Swayze.

At the start of 2008, Biel shot Easy Virtue, an adaptation of the play by Noël Coward. Like the play, the film is set in the 1920s and Biel plays young widow Larita, who impulsively marries John Whittaker in France and must face her disapproving in-laws on returning to England. The film premiered in September 2008 at the Toronto International Film Festival. Critics praised Biel for her performance, with Todd McCarthy of Variety saying Biel "more than kept up" with veterans Kristin Scott Thomas and Colin Firth and praising her "sparkling" performance. The Hollywood Reporter described her performance as "an irresistible force of nature — a kind, witty, supremely intelligent and beautiful woman who ... is capable of rejoinders that thoroughly undercut her opponent's withering criticism." Biel also performed two songs on the film's soundtrack, "Mad About the Boy" and "When the Going Gets Tough".

In 2009, Biel lent her voice to the animated science fiction film Planet 51. In April 2008, Biel began working on the political satire Nailed, with Jake Gyllenhaal. The film centers around a woman who accidentally gets a nail lodged in her head, then travels to Washington D.C. to fight for better health care. Biel performed the role of "Sarah Brown" with the Los Angeles Philharmonic in a fully staged concert production of Guys and Dolls during the 2009 season at the Hollywood Bowl. On the last night, she received a rousing standing ovation from 17,000 people. She subsequently landed a part in Lincoln Center Theater's two-week-long workshop of the musical version of the Pedro Almodóvar classic Women on the Verge of a Nervous Breakdown, along with Salma Hayek.

Retrieved from "https://movies.fandom.com/wiki/Jessica_Biel?oldid=167584"
Community content is available under CC-BY-SA unless otherwise noted.