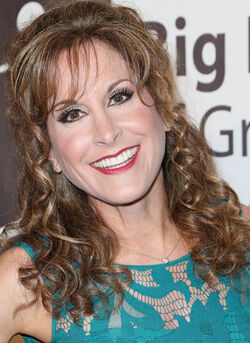 Jodi Marie Marzorati Benson (born October 10, 1961) is an American voice actress, actress and soprano singer. She is best known for providing both the speaking and the singing voice of Princess Ariel in Disney's The Little Mermaid and its sequel, prequel, and television series. Benson voiced the character Barbie in the 1999 movie Toy Story 2, the 2010 Academy Award winning movie Toy Story 3 and the Toy Story toon Hawaiian Vacation. For her contributions to the Disney company, Benson was named a Disney Legend in 2011.

Benson's debut on Broadway was in the 1983 Kenny Ortega-directed "Marilyn: An American Fable". Other Broadway credits include a starring role in the Broadway musical Smile, where she introduced a song called "Disneyland". Howard Ashman, the lyricist of Smile, would go on to write the lyrics for The Little Mermaid. She describes the song "Disneyland" at the "Smile" Reunion concert held on Sept. 22, 2014, "This is the first piece of the puzzle of my life, the first step of the journey, so to speak". Benson also sings "Disneyland" on a compilation CD called Unsung Musicals. In 1989, Benson appeared in the Broadway musical, Welcome to the Club, alongside Samuel E. Wright, who performed the voice for Sebastian the Crab in The Little Mermaid.

In 1992, Benson received a Tony Award nomination for Best Actress in a Musical for her role as Polly Baker in Crazy for You. She played the narrator in Joseph and the Amazing Technicolor Dreamcoat in 1998.

Benson also played the Queen in a one-night concert version of Rodgers & Hammerstein's Cinderella at the Nashville Symphony Orchestra in May 2010.

She was at the 2012 SYTA conference singing her signature song Part of Your World on Monday, August 27, 2012.

Benson has been the guest artist for the Candlelight Processional for 5 years at Walt Disney World including December 10–13, 2012.

Benson can be heard on over a dozen recordings and has a six-part DVD series entitled Baby Faith from the creators of Baby Einstein. Her animated TV series include the Emmy Award-winning Camp Lazlo for the Cartoon Network, The Little Mermaid, Batman Beyond, The Grim Adventures of Billy and Mandy, The Wild Thornberrys, Barbie, Hercules: Zero to Hero, P. J. Sparkles, and the series Sofia the First for Disney as well as many others.

On the concert stage, Benson has performed as a concert soloist with symphonies all over the world, including The Boston Pops, The Philly Pops (conductor: Peter Nero), The Hollywood Bowl Orchestra (conductor: John Mauceri), The National Symphony (conductor: Marvin Hamlisch), Cleveland, Dallas, Tokyo, San Francisco and Chicago Symphonies, to name a few. She starred in the Kennedy Center Honors for Ginger Rogers, and in Disney's Premiere in Central Park with Pocahontas, The Walt Disney World 25th Anniversary Spectacular and Disney's 100 Years of Magic. Benson is the resident guest soloist for the Walt Disney Company/Disney Cruise Line and ambassador for feature animation.

On June 6, 2016, Benson performed the role of Ariel at the Hollywood Bowl's concert performance of The Little Mermaid.