Moviepedia
Register
Don't have an account?
Sign In
Advertisement
in: Pages with unverified statements, 1951 Births, Living people,
and 8 more 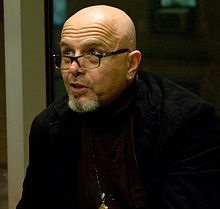 Joseph Peter "Joe" Pantoliano (born September 12, 1951) is an American actor who appeared in films such as Baby's Day Out, The Fugutive (1993) and U.S. Marshals, The Matrix and Memento.

Pantoliano portrayed Bob Keane in La Bamba, Cypher in The Matrix, Teddy in Memento, Francis Fratelli in The Goonies, Guido in Risky Business, Eddie Moscone in Midnight Run, and Caesar in Bound. He also played Deputy U.S. Marshal Cosmo Renfro in both The Fugitive and U.S. Marshals. He is often referred to as "Joey Pants" because of the difficulty some people have pronouncing his Italian surname.