watch 03:27
Wiki Targeted (Entertainment)
Do you like this video?
Play Sound
Joe Pesci 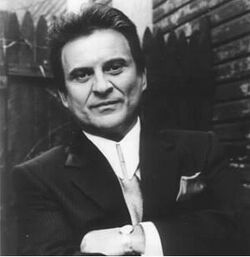 Joseph Frank "Joe" Pesci (1943 -) is an American actor, comedian, and musician. He is known for playing a variety of different roles, from violent mobsters to comedic leads to quirky sidekicks. Pesci has starred in a number of high profile films including Goodfellas, Casino, Raging Bull, Once Upon a Time in America, My Cousin Vinny, JFK, Home Alone, and the Lethal Weapon series. He took a six year hiatus from acting between 1999 and 2005 before returning for a cameo in The Good Shepherd.

In 1990, Pesci won the Academy Award for Best Supporting Actor for his role as the psychotic mobster Tommy DeVito in Goodfellas, ten years after receiving a nomination in the same category for Raging Bull.

Retrieved from "https://movies.fandom.com/wiki/Joe_Pesci?oldid=52782"
Community content is available under CC-BY-SA unless otherwise noted.