Start a Wiki
watch 01:48
The Loop (Movies)
Do you like this video?
John Dies at the End 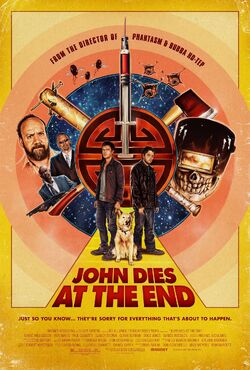 John Dies at the End is an American dark comedy-horror film written and directed by Don Coscarelli, based upon the David Wong novel of the same name. The film premiered at the 2012 Sundance Film Festival to great acclaim.

It's a drug that promises an out-of-body experience with each hit. On the street they call it Soy Sauce, and users drift across time and dimensions. But some who come back are no longer human. Suddenly a silent otherworldly invasion is underway, and mankind needs a hero. What it gets instead is John and David, a pair of college dropouts who can barely hold down jobs. Can these two stop the oncoming horror in time to save humanity? No. No, they can't.

In 2007, Coscarelli optioned the film rights to the comedic horror novel John Dies at the End. The novel, written by David Wong, was first published online as a webserial beginning in 2001, then as an edited manuscript in 2004, and then as a paperback edition in 2007. In speaking toward his interest in the story, Coscarelli stated "I was greatly impressed by David Wong's crazed originality and impressive imagination. He's like a mash-up of Douglas Adams and Stephen King, both smart and goofy, scary and funny – it really spoke to me. JDatE is as addictive as the 'Soy Sauce' street drug that kicks the plot into gear."

Filming took place on locations in Southern California. On January 27, 2011, Coscarelli announced on his Twitter page that principal photography had been completed and that the film has entered post-production, for extensive visual FX work. The film premiered at the Sundance Film Festival on January 23, 2012. Paul Giamatti called the novel "an embarassment of riches", and spoke toward the screen adaption, stating, "what's going to be tragic is what's going to have to go, because stuff is going to have to go and it will kill me whatever goes because you want it all to be in there and you've still got to have this stuffed bag of stuff." He also praised the actors and Coscarelli's choices, stating "Don cast it brilliantly. The actors were so good."

Retrieved from "https://movies.fandom.com/wiki/John_Dies_at_the_End?oldid=119598"
Community content is available under CC-BY-SA unless otherwise noted.