watch 00:59
The Loop (Movies)
Do you like this video?
John Hughes 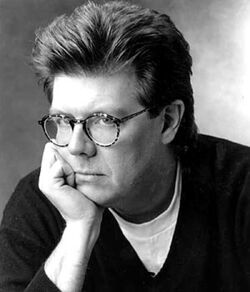 John Wilden Hughes Jr. (February 18, 1950 – August 6, 2009) was an American filmmaker. Beginning as an author of humorous essays and stories for National Lampoon, he went on to write and direct some of the most successful films of the 1980s and early 90s, including the comedy National Lampoon's Vacation (1983), and the sequels, National Lampoon’s European Vacation (1985), and National Lampoon's Christmas Vacation (1989), the fish out of water comedy Mr. Mom (1983), the coming-of-age comedy Sixteen Candles (1984), the teen sci-fi comedy Weird Science (1985), the coming-of-age comedy-drama The Breakfast Club (1985), the coming-of-age comedy Ferris Bueller's Day Off (1986), the romantic comedy-drama Pretty in Pink (1986), the romance Some Kind of Wonderful (1987), the comedies Planes, Trains and Automobiles (1987), She's Having a Baby (1988), and Uncle Buck (1989), the slapstick comedy Baby's Day Out (1994), the family movie Beethoven (co-written under a pseudonym with Amy Holden-Jones) and the Christmas family slapstick comedy movie Home Alone, and it’s sequels, Home Alone 2: Lost in New York, and Home Alone 3.

His work in this mode has often been criticised for being cliched and lazy, not up to the standard of his previous films. Most have been popular with audiences, however; even Baby's Day Out, a box office bomb in the US, was a hit in South Asian countries, inspiring a franchise made for those markets.

Many of Hughes' films have been set in the Chicago metropolitan area. He is perhaps most famous today for his coming-of-age teen comedies, which often combined magic realism with honest depictions of small-town teenage life. Many of his most enduring characters from these years were written for Molly Ringwald, who was Hughes' muse. While out on a walk one summer morning in New York, Hughes suffered a fatal heart attack and was pronounced dead at the hospital. His legacy after his death was honored by many, and he was even honored at the 82nd Academy Awards by actors with whom he had worked, like Matthew Broderick, Molly Ringwald, Anthony Michael Hall, Macaulay Culkin, and several others. Actors whose careers Hughes helped launch include Michael Keaton, Anthony Michael Hall, Bill Paxton, Matthew Broderick, Macaulay Culkin, and the members of the Brat Pack.

Hughes was born in Lansing, Michigan on February 18, 1950, the son of Marion Joyce (Crawford), who volunteered in charity work, and John Hughes Sr., who worked in sales. He spent the first twelve years of his life in Grosse Pointe, Michigan. Hughes described himself as "kind of quiet" as a kid.

"I grew up in a neighborhood that was mostly girls and old people. There weren't any boys my age, so I spent a lot of time by myself, imagining things. And every time we would get established somewhere, we would move. Life just started to get good in seventh grade, and then we moved to Chicago. I ended up in a really big high school, and I didn't know anybody. But then The Beatles came along (and) changed my whole life. And then Bob Dylan's Bringing It All Back Home came out and really changed me. Thursday I was one person, and Friday I was another. My heroes were Dylan, John Lennon and Picasso, because they each moved their particular medium forward, and when they got to the point where they were comfortable, they always moved on."

In 1963, Hughes's family moved to Northbrook, Illinois, a suburb of Chicago. This is where Hughes's father found work selling roofing materials. There Hughes attended Glenbrook North High School, which gave him inspiration for the films that made his reputation in later years. While he was painting homecoming murals at Glenbrook North, he met Nancy Ludwig, who was a cheerleader.

After dropping out of the University of Arizona, Hughes began selling jokes to well-established performers such as Rodney Dangerfield and Joan Rivers. Hughes used his jokes to get an entry-level job at Needham, Harper & Steers as an advertising copywriter in Chicago in 1970 and later in 1974 at Leo Burnett Worldwide. During this time, he created what became the famous Edge "Credit Card Shaving Test" ad campaign.

Hughes' work on the Virginia Slims account frequently took him to the Philip Morris headquarters in New York City. This gave him the opportunity to spend time at the offices of the National Lampoon magazine. Hughes subsequently penned a story, inspired by his family trips as a child, that was to become his calling card and entry onto the staff of the magazine. The piece, "Vacation '58", later became the basis for the film National Lampoon's Vacation. Among his other contributions to the Lampoon, the April Fools' Day stories "My Penis" and "My Vagina" gave an early indication of Hughes's ear for the particular rhythm of teenage dialogue, as well as for the various indignities of teen life in general.

His first credited screenplay, Class Reunion, was written while still on staff at the magazine. The resulting film became the second disastrous attempt by the flagship to duplicate the runaway success of Animal House. It was Hughes's next screenplay for the imprint, National Lampoon's Vacation (1983), that would prove to be a major hit, putting the Lampoon back on the map. This, along with the success of another Hughes script, Mr. Mom, earned him a three-movie deal with Universal Studios.

Hughes's directorial debut, Sixteen Candles, won almost unanimous praise when it was released in 1984, due in no small part to its more honest depiction of upper middle class high school life, in stark contrast to the Porky's-inspired comedies made at the time. It was the first in a string of efforts set in or around high school, including The Breakfast Club, Pretty in Pink, Weird Science, Ferris Bueller's Day Off (see also Brat Pack) and Some Kind of Wonderful.

To avoid being pigeonholed as a maker of teen comedies, Hughes branched out in 1987, directing the smash hit Planes, Trains and Automobiles starring Steve Martin and John Candy. His later output would not be so critically well received, though films like Uncle Buck proved popular. Hughes's greatest commercial success came with Home Alone, a film he wrote and produced about a child accidentally left behind when his family goes away for Christmas, forcing him to protect himself and his house from a pair of inept burglars. Home Alone was the top-grossing film of 1990, and remains the most successful live-action comedy of all time. He also wrote the sequels, Home Alone 2: Lost in New York and Home Alone 3. His last film as a director was 1991's Curly Sue.

He also wrote screenplays under the pseudonym Edmond Dantes (or Dantès), after the protagonist of Alexandre Dumas's novel The Count of Monte Cristo. Screenplays submitted under this pseudonym were Maid in Manhattan, Drillbit Taylor, and the Beethoven franchise.

Hughes collaborated with the actor John Candy in a number of movies, most of these were films that Candy starred in and Hughes had written. Candy had a role in National Lampoon's Vacation which Hughes had written, and that launched his own career. Hughes eventually directed Candy in the highly successful Planes, Trains & Automobiles and Uncle Buck. Candy also appeared in movies such as The Great Outdoors and Home Alone which Hughes had written and produced. Hughes produced Only the Lonely with Candy in the lead role. The two became close friends. Hughes was considerably shaken by John Candy's sudden death of a heart attack in 1994. "He talked a lot about how much he loved Candy—if Candy had lived longer, I think John would have made more films as a director," says Vince Vaughn, a friend of Hughes.

Hughes was married to Nancy Ludwig in 1970, when he was 20 and she was 19. They had two children, John Hughes III (born 1976) and James Hughes (born 1979). After Hughes left the spotlight, he began to keep more than 300 moleskin notebooks and recorded daily observations and other ideas. He had a grandson, whom he was visiting the night before he died. In 1994, Hughes retired from the public eye and moved back to the Chicago area. In the years following, Hughes rarely granted interviews to the media save a select few in 1999 to promote the soundtrack album to Reach the Rock, an independent film he wrote. The album was compiled by Hughes's son, John Hughes III, and released on his son's Chicago-based record label, Hefty Records. He also recorded an audio commentary for the 1999 DVD release of Ferris Bueller's Day Off.

On August 5, 2009, Hughes and Ludwig flew to New York City to visit their son James's newly born son. James said that Hughes appeared to be in good health that night, and that the family had made plans for the next day. On the morning of August 6, Hughes was taking a walk near his hotel, on West 55th Street in Manhattan, when he suffered a heart attack. He was rushed to Roosevelt Hospital, where he was later pronounced dead. He was 59 years old. Hughes's funeral was held on August 11 in Chicago; he was buried at Lake Forest Cemetery. He is survived by his wife, his two children, and grandchildren.

The pilot episode of the NBC comedy Community, broadcast on September 17, 2009, was dedicated to Hughes. The episode included several references to The Breakfast Club and ended with a cover of "Don't You (Forget About Me)". The One Tree Hill episode titled "Don't You Forget About Me", broadcast on February 1, 2010, ended with a scene similar to the ending scene of Sixteen Candles and included some other references to his movies such as Home Alone. The 2011 Bob's Burgers episode Sheesh! Cab, Bob? also paid homage to Sixteen Candles.

After Hughes' death, many of those who knew him commented on the impact Hughes had on them and on the film industry. Judd Apatow said "Basically, my stuff is just John Hughes films with four-letter words. I feel like a part of my childhood has died. Nobody made me laugh harder or more often than John Hughes." Molly Ringwald said, "I was stunned and incredibly sad to hear about the death of John Hughes. He was and will always be such an important part of my life.... He will be missed – by me and by everyone that he has touched. My heart and all my thoughts are with his family now." Matthew Broderick also released his own statement, saying, "I am truly shocked and saddened by the news about my old friend John Hughes. He was a wonderful, very talented guy and my heart goes out to his family."

The 82nd Academy Awards (2010) included a tribute to Hughes' work. A retrospective of clips from Hughes' films was followed by cast members from several of them, including Molly Ringwald, Matthew Broderick, Macaulay Culkin, Judd Nelson, Ally Sheedy, Anthony Michael Hall and Jon Cryer, gathering on stage to commemorate the man and his contributions to the film industry.

Movies with scenes taking place in fictional high schools named after Hughes include: the 2001 satire Not Another Teen Movie, the 2010–2013 Disney Channel sitcom Shake It Up, and the 2016 Hallmark movie Date With Love.

Hughes' work has also influenced a new generation of millennial filmmakers, including M. H. Murray of Teenagers fame, who has cited Hughes as one of his main influences in interviews, once stating: “I loved how John Hughes wrote teens ... They were flawed in this genuine sort of way.” Kelly Fremon Craig, who wrote and directed The Edge of Seventeen, also cited Hughes as an influence.

Don't You Forget About Me is a documentary about four Canadian filmmakers who go in search of Hughes after his drop out of the spotlight in 1994, featuring interviews with actors from preceding Hughes films, notably missing Molly Ringwald, Anthony Michael Hall, and Matthew Broderick. The movie is named after the Simple Minds song of the same name, which was the theme song for the film The Breakfast Club which Hughes produced, wrote, and directed.

Retrieved from "https://movies.fandom.com/wiki/John_Hughes?oldid=136588"
Community content is available under CC-BY-SA unless otherwise noted.