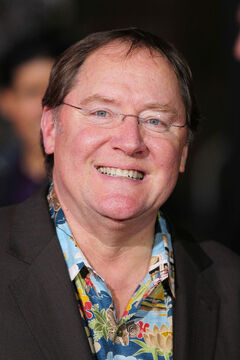 John Lasseter is one of the three founding fathers of Pixar Animation Studios.

An animator, director, producer and writer, John is responsible for most of Pixar's success and oversees all of the studios projects.

Lasseter's father was a parts manager at a Chevrolet dealership, while his mother was an art teacher at Bell Gardens Senior High School. Lasseter graduated from California Institute of the Arts, where he met future colleague Brad Bird. He passed a furniture store and noticed a lamp on a desk in the window display. He told his mother that his idea was to make that lamp come to life. This idea eventually led to the creation of Pixar's Luxo, Jr..

On graduation, Lasseter joined the Walt Disney Company, as a Jungle Cruise skipper at Disneyland in Anaheim. Lasseter later obtained a job as an animator at Walt Disney Feature Animation. While working on Mickey's Christmas Carol, he was invited by his friends Jerry Rees and Bill Kroyer to see the first lightcycles sequences for an upcoming film entitled Tron, featuring state-of-the-art computer generated imagery. He immediately saw the potential of this new technology and what it could do for animation. Up to that time, the studio had used a multiplane camera to add depth to its animation.

Lasseter realized that computers could be used to make movies with three dimensional backgrounds where traditionally animated characters could interact to add new visually stunning depth that had not been conceived before. After he and Glen Keane had finished the short test film Where the Wild Things Are (a decision chosen based on the fact that Disney had considered producing a feature based on the works of Maurice Sendak), Lasseter and Thomas L. Wilhite decided they wanted to make a whole feature this way. The story they chose was The Brave Little Toaster by Thomas Disch, but in their enthusiasm, they unknowingly stepped on some of their direct superiors' toes by going around them in their effort to get the project into motion. One of them disliked it so much that when Lasseter and Wilhite presented their idea to him, which he at that time was already aware of, he turned it down. A few minutes after the meeting, Lasseter received a phone call telling him that his job had been terminated.

While putting together a crew for the planned feature, he had made some contacts in the computer industry, among them Alvy Ray Smith and Ed Catmull at Lucasfilm Computer Graphics Group. After being fired, Lasseter visited a computer graphics conference at the Queen Mary in Long Beach, where he met and talked to Catmull again. Before the day was over, Lasseter had made a deal to work as an "interface designer" with Catmull and his colleagues on a project that resulted in their first computer animated short: The Adventures of André and Wally B. It became even more revolutionary than Lasseter had visualized before he joined Lucasfilm, since his original idea had been to create only the backgrounds on computers. But in the final short everything was computer animated, including the characters. After this short CGI film, things would continue to grow until the point where they made the first computer animated feature, Toy Story.

Lasseter is a founding member of Pixar, where he oversees all of Pixar's films and associated projects as an executive producer. He also personally directed Toy Story, A Bug's Life, Toy Story 2, Cars and Cars 2.

He has won two Academy Awards, for Animated Short Film (Tin Toy), as well as a Special Achievement Award (Toy Story). Lasseter has been nominated on four other occasions—in the category of Animated Feature, for both Cars (2006) and Monsters, Inc. (2001), in the Original Screenplay category for Toy Story (1995) and in the Animated Short category for Luxo, Jr. (1986).

In December 2006, he announced that Disney will start producing animated shorts which will begin to be released theatrically once more. This was a decision Lasseter took because he sees this as an excellent way to train and discover new talents in the company, as well as a testing ground for new techniques and ideas. The shorts will be in 2D, CGI or a combination of both.[1]

Lasseter is a close friend and admirer of Japanese animator Hayao Miyazaki, and has been executive producer on several of Miyazaki's films for their release in the United States, also overseeing the dubbing of the films for their English language soundtrack.

Lasseter lives in Sonoma, CA with his wife Nancy, a graduate of Carnegie Mellon University, whom he met at a computer graphics conference. He has five sons, Joey, Bennett, P.J. (Paul James), Sam, and Jackson, whose ages range from 10 to 25. They also have a dog named Frank. Lasseter's father lives in a house on the same property as his own.

Retrieved from "https://movies.fandom.com/wiki/John_Lasseter?oldid=76173"
Community content is available under CC-BY-SA unless otherwise noted.