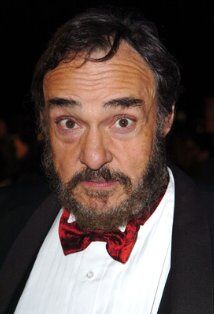 John Rhys-Davies (born May 5, 1944) is a British actor. Although he has dozens of films to his credit, Rhys-Davies is probably best known for his characters in two blockbuster film series: Sallah in the Indiana Jones films and the dwarf Gimli in the Lord of the Rings films (in which he also voiced Treebeard.)

Rhys-Davies was born in Ammanford, Carmarthenshire, Wales, to Phyllis and Rhys Davies, a local mechanical engineer. Davies spent much of his childhood in his mother's home town of Ammanford], although was also raised in Africa. He was sent to Truro School in Cornwall. He later studied at RADA and the University of East Anglia. He currently lives in the Isle of Man.

On April 30, 2003 Rhys Davies gave an interview to the local newspaper, the South Wales Guardian, in which he described his upbringing in Ammanford: "My mother Phyllis was born in Coopers near Tycroes and my father Rhys was a local mechanical engineer from the area. I was born in Ammanford but when I was young we moved to Africa and I was educated in a private school in England. My childhood has influenced so much of my career because I have been fortunate enough to have experienced so many cultures. My parents moved back to Ammanford in the 1980s and I returned as often as possible."

Rhys-Davies is a member of the UK Conservative Party. As a university student in the 1960s, he was a radical leftist, but he started to change his views when he went to heckle a young local member of parliament, Margaret Thatcher. Rhys-Davies says that "she shot down the first two hecklers in such brilliant fashion that I decided I ought for once to shut up and listen."

In 2004, Rhys-Davies faced harsh criticism from Muslim groups, the Tolkien Society and many others because of an interview with American World Magazine in which he compared the plot of The Return of the King with the current situation of Western Europe, whose Christian-based culture he described as being threatened with replacement by Muslim values.

He is also a supporter of The Planetary Society.

The actor first gained widespread popularity for his performance as Portuguese captain Rodrigues in the 1980 miniseries, Shogun. He has since appeared in numerous television shows and TV miniseries, including a leading role in the television series Sliders as Professor Maximillian Arturo from 1995 to 1997. He also made several appearances on Star Trek: Voyager as a holodeck version of Leonardo da Vinci.

He has also lent his distinctive deep, gruff voice to many video games and animated TV shows, including Gargoyles, as the character MacBeth. He appears in the full motion video cut scenes of computer games including Ripper, Dune 2000 and the Wing Commander series. He also lent his vocal talents to the Sierra game Quest for Glory IV: Shadows of Darkness, which was released with his narration on a CD ROM version in 1995.

In 2004 he was the unknowing subject of an elaborate internet prank that spread false rumors in several mainstream media sources that he was scheduled to play the role of General Grievous in Star Wars Episode III. [1]