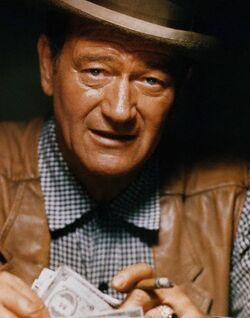 Marion Mitchell Morrison (born Marion Robert Morrison; May 26, 1907 – June 11, 1979), known professionally as John Wayne, was an American actor, director, and producer. He is best known for films such as The Quiet Man, Rio Bravo and The Longest Day.

Wayne was born Marion Robert Morrison on May 26, 1907 in Winterset, Iowa, the son of Clyde Leonard Morrison and Molly Alberta Brown. His middle name was soon changed from Robert to Mitchell when his parents decided to name their next son Robert.

He began his film debut in an uncredited role in Brown of Harvard and starred in another film Bardelys and the Magnificent. He later had his first leading role in The Big Trail. Later he became known for others such as Stagecoach, Red River, The Quiet Man, The Searchers, Rio Bravo, Donovon's Reef, The Sons of Katie Elder, True Grit and The Shootist.

Retrieved from "https://movies.fandom.com/wiki/John_Wayne?oldid=119007"
Community content is available under CC-BY-SA unless otherwise noted.