watch 00:59
The Loop (Movies)
Do you like this video?
John Wick: Chapter 3 – Parabellum 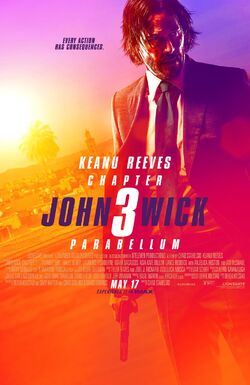 Still on the run following his assassination of Santino D'Antonio in The Continental, and with a $14 million global contract on him, John Wick (Keanu Reeves) is excommunicated from every Continental service, which forces him to fight his way out of New York City with the help of a hitwoman (Halle Berry) who still trusts him.

Retrieved from "https://movies.fandom.com/wiki/John_Wick:_Chapter_3_–_Parabellum?oldid=209018"
Community content is available under CC-BY-SA unless otherwise noted.