View src
watch 01:36
We're Getting Mutants in the MCU - The Loop
Do you like this video?
Play Sound
Johnny Depp 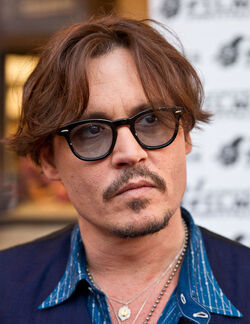 John Christopher "Johnny" Depp II (born June 9, 1963) is an American actor, comedian, producer, singer and musician. He has won the Golden Globe Award and Screen Actors Guild award for Best Actor. Depp rose to prominence on the 1980s television series 21 Jump Street, becoming a teen idol. Turning to film, he played the title character of Edward Scissorhands (1990) and later found box office success in films such as Sleepy Hollow (1999), Charlie and the Chocolate Factory (2005), Rango (2011) and the Pirates of the Caribbean franchise (2003–present). He has collaborated with director and friend Tim Burton in eight films, most recently with Dark Shadows.

Depp has gained acclaim for his portrayals of characters such as Edward D. Wood, Jr., in Ed Wood, Joseph D. Pistone in Donnie Brasco, Hunter S. Thompson in Fear and Loathing in Las Vegas, Captain Jack Sparrow in the Pirates of the Caribbean movies, Mad Hatter in Alice In Wonderland, Gellert Grindelwald in Fantastic Beasts, and the bank robber John Dillinger in Michael Mann's Public Enemies. Films featuring Depp have grossed over $3.1 billion at the United States box office and over $7.6 billion worldwide. He has been nominated for top awards many times, winning the Best Actor Awards from the Golden Globes for Sweeney Todd: The Demon Barber of Fleet Street and from the Screen Actors Guild for Pirates of the Caribbean: The Curse of the Black Pearl. He also has garnered a sex symbol status in American cinema, being twice named as the Sexiest man alive by People magazine in 2003 and 2009. He has been listed in the 2012 Guinness Book of World Records as the highest paid actor with $75 million.

Born in a poor family and with an abusive mother, John Christopher Depp developed an interest in music and tried to build a band but he didn't succeed due to conflicts.

He was later recruited by Nicolas Cage that found potential in him and asked him to do a provide for a part in the horror film A Nightmare on Elm Street and Depp accepted.

After winning the part and performing in the film, Johnny became interested in becoming an actor and luckily for him he was instantly hired for other successful movies like Platoon, Cry-Baby and his first famous role in Edward Scissorhands. However, after his grandfather's death, Johnny started to become a drug addicted but luckily he succeeded to win his addiction and continuing his acting career. The role that truly turned him into an iconic actor was the role of Captain Jack Sparrow in the Pirates of the Caribbean franchise, a role that he still plays nowadays and even dress up like that character in real life during his donations.

He had a romantic relationship with Winona Ryder, his Edward Scissorhands co-star, in 1990 but they separated since they both felt they weren't ready for a serious relationship.

On 2000, he met and started a romantic relationship with Vanessa Paradis and they had togheter two children: Lily-Rose Depp and Jack Depp (which Johnny named after his character Jack Sparrow). Unluckily on 2011, since they didn't love each other anymore the couple separated but remained in good terms as friends.

On 2014, he met again his The Rum Diary co-star Amber Heard and they married after dating for a long time. However once married Heard was extremely abusive towards Depp and even cut his finger off once which was the last stroke for the actor that made him decide to asking the divorce. Unluckily, Heard wanted his money and falsely accused him of domestic violence in an attempt to ruin his career damaging his reputation.

Luckily, Johnny Depp released some audios in 2020 that revealed that he was the victim of domestic violence and that Heard was the abuser thus restoring his reputation with his exes and his friends defending him.

He made his cinematographic debut as an actor in Nightmare. He later starred in a series titled 21 Jump Streets where he played a young police officer named Tom Hanson. Despite the success and the fame he got from the series, Depp hated the role as he didn't want to be the typical good looking boy actor that every girl loves.

He earned true respect as an actor for the first time by playing Edward Scissorhands in the movie of the same name, directed by Tim Burton starring his friendship and long date collaboration with the director.

After that movie, he started in movies like Fear and Loathing in Las Vegas, Blow, Ed Wood and Chocolate. Most of these movies were box office flops but they became cults.

In the 2010 years, he played the Mad Hatter in Tim Burton's Alice in Wonderland, a role that he would later reprise in its 2016 sequel Alice Through the Looking Glass, the con artist Charlie Mortdecai in Mortdecai, Gellert Grindelwald in Fantastic Beats and Where to Find Them and Richard Brown in The Professor.

On 2020 he portrays the tyrannical general Joyl in Waiting for the Barbarians. The movie was received well by audience and was a box office hit.

On 2021, Depp plays Eugene Smith in the biographic film Minamata that shows how he got the photos of the poison in China. He later voices Jack Sparrow in the videogame Sea of Thieves: Pirate's Life, marking the first time the actor played or voiced the character since the false accusations of Amber Heard.