watch 01:38
The Loop (Movies)
Do you like this video?
Johnny the Giant Killer 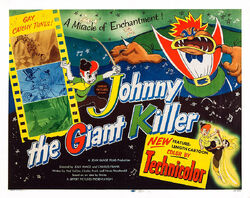 Johnny the Giant Killer aka Johnny vs. the Giant (French: Jeannot l'intrépide) is a 1950 French fantasy animated film directed by Jean Image. The film was made in 1½ years with a very small crew. The music was composed by René Cloërec.

The film won the Venice Film Festival's Grand Prix for children's films, and was picked up for U.S. distribution in 1953 by Lippert Pictures, a company specialising in B-movies. Johnny the Giant Killer was never copyrighted at all, hence its current public domain status which has led to numerous VHS and DVD copies of the cartoon published by various distributors.

Johnny and a troop of boy scouts are camping in a forest. One night Johnny reads a tentful of scouts a fairy tale book about the evil giant. They sneak out to find the giant’s castle. The giant captures them all except for Johnny, whom he shrinks to insect size. A bird carries Johnny from the castle to the forest, where he sees the friendly insects of Insect-ville, saves them from a lizard, is captured by spiders, and is rescued by bees. A bee majordomo shows him how bees live. The queen bee favors Johnny, which makes the drones jealous. After Johnny defeats the head drone in a sword fight, the drone sneaks out to help the evil wasps to capture the beehive. Johnny defeats them, and the grateful queen mobilizes all the forest insects into an army to help Johnny defeat the giant and rescue the other boys. Johnny and the boys are restored to full size. The film ends with them returning to the scout camp, with the giant shrunk to insect size in a birdcage as a souvenir.

Retrieved from "https://movies.fandom.com/wiki/Johnny_the_Giant_Killer?oldid=125884"
Community content is available under CC-BY-SA unless otherwise noted.