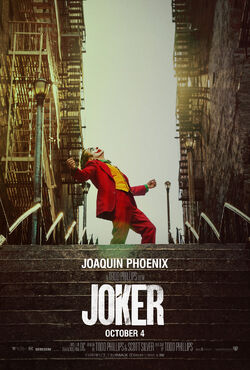 Joker is a 2019 American crime film based on the DC Comics character of the same name, distributed by Warner Bros. Pictures. It is intended to be the first film in a series of DC-based films separate from the shared DC Extended Universe (DCEU). The film is directed by Todd Phillips from a screenplay he wrote with Scott Silver, and stars Joaquin Phoenix as the Joker, along with Robert De Niro, Zazie Beetz, Bill Camp, Frances Conroy, Brett Cullen, Glenn Fleshler, Douglas Hodge, Marc Maron, Josh Pais, and Shea Whigham. In Joker, a failed stand-up comedian is driven insane and becomes a psychopathic criminal.

Phoenix had been interested in a low budget character study-type film about a comic book villain since 2014. After deciding to deemphasize the shared nature of the DCEU, Warner Bros. and DC Films announced plans for a Joker-centered film in August 2017, with Phillips directing and producing, as well as co-writing with Silver. Martin Scorsese was also attached to produce, although he dropped out in July 2018 and was replaced by Emma Tillinger Koskoff. Principal photography began in September 2018 in New York City, and is scheduled to eventually move to Jersey City and Newark.

In 1981, party clown and aspiring stand-up comedian Arthur Fleck lives with his mother, Penny, in Gotham City. Gotham is rife with crime and unemployment, leaving segments of the population disenfranchised and impoverished. Arthur suffers from a medical disorder that causes him to laugh at inappropriate times; he depends on social services for medication. After a gang of delinquents attacks Arthur in an alley, his co-worker, Randall, gives him a gun for protection. Arthur meets his neighbor, single mother Sophie Dumond, and invites her to his upcoming stand-up routine at a nightclub.

While entertaining at a children's hospital, Arthur's gun falls out of his pocket. Randall lies to management that Arthur bought the gun himself and Arthur is fired. On the subway, still in his clown makeup, Arthur is beaten by three drunken Wayne Enterprises businessmen; he shoots two in self-defense and executes the third. The murders are condemned by billionaire mayoral candidate Thomas Wayne, who calls those envious of more successful people "clowns." Demonstrations against Gotham's rich begin, with protesters donning clown masks in Arthur's image. Funding cuts shutter the social service program, leaving Arthur without his medication.

Sophie attends Arthur's stand-up routine, which goes poorly; he laughs uncontrollably and has difficulty delivering his jokes. Popular talk show host Murray Franklin mocks Arthur by showing clips from the comedy routine on his show. Arthur intercepts a letter written by Penny to Thomas, alleging that he is Thomas's illegitimate son, and berates his mother for hiding the truth. Arthur goes to Wayne Manor, where he meets Thomas's young son Bruce, but flees after a scuffle with the family butler Alfred Pennyworth. Following a visit from two Gotham City Police Department detectives investigating Arthur's involvement in the train murders, Penny suffers a stroke and is hospitalized.

At a public event, Arthur confronts Thomas, who tells him that Penny is delusional and not his biological mother. In denial, Arthur visits Arkham State Hospital and steals Penny's case file; the file says Penny adopted Arthur as a baby and allowed her abusive boyfriend to harm them both. However, Penny says that Thomas used his influence to fabricate the adoption and commit her to the asylum to hide their affair. Distraught, Arthur returns home and enters Sophie's apartment unannounced. Frightened, Sophie tells him to leave; their previous encounters were Arthur's delusions. The following day, Arthur kills Penny at the hospital.

Arthur is invited to appear on Murray's show due to the unexpected popularity of his comedy routine's clips. As he prepares, Arthur is visited by Randall and fellow ex-colleague Gary. Arthur murders Randall but leaves Gary unharmed as he treated him well in the past. En route to the studio, Arthur is pursued by the two detectives onto a train filled with some of the clown protesters. One detective accidentally shoots a protester and incites a riot, allowing Arthur to escape.

Before the show goes live, Arthur requests that Murray introduce him as Joker, a reference to Murray's previous mockery. Arthur walks out to applause, but starts telling morbid jokes, confesses to the train murders, and rants about how society abandons the downtrodden and mentally ill. Arthur kills Murray and is arrested as riots break out across Gotham. One rioter corners the Wayne family in an alley and murders Thomas and his wife, Martha, sparing Bruce.[a] Rioters in an ambulance crash into the police car carrying Arthur, freeing him; he dances to the cheers of the crowd.

At Arkham, Arthur laughs to himself about a joke and tells his psychiatrist she would not understand it. He runs from the orderlies, leaving a trail of bloodied footprints.

Additionally, Josh Pais has been cast in an undisclosed role.

In 2014, Joaquin Phoenix was interested in acting in a low-budget "character study"-type film about a comic book villain like the Joker. Phoenix had previously declined to act in the Marvel Cinematic Universe because he would have been required to play the roles he was offered, like Doctor Strange, in multiple films. He did not believe his idea for a film should cover the Joker, however, as he believed that character had been depicted in a similar way before. Phoenix's agent suggested a meeting with Warner Bros. but Phoenix declined.

After the successful release of Wonder Woman (2017), DC Films decided to deemphasize the shared nature of its DC Comics-based film franchise, the DC Extended Universe (DCEU). DC Entertainment president Diane Nelson stated "Our intention, certainly, moving forward is using the continuity to help make sure nothing is diverging in a way that doesn't make sense, but there's no insistence upon an overall story line or interconnectivity in that universe... Moving forward, you'll see the DC movie universe being a universe, but one that comes from the heart of the filmmaker who's creating them." In August 2017, Warner Bros. and DC Films revealed plans for a Joker film separate from the DCEU, with Todd Phillips directing and co-writing with Scott Silver, and Martin Scorsese co-producing with Phillips. The script draws inspiration from Scorsese's films Taxi Driver, Raging Bull, and The King of Comedy, as well as Alan Moore's graphic novel Batman: The Killing Joke.

By September 2017, Warner Bros. was considering casting Leonardo DiCaprio as the Joker, but by February 2018, Phoenix was Phillips' top choice for the role. Phoenix said when he learned of the film, he became excited because it was the kind of film he was looking to make, describing it as unique and stating it did not feel like a typical "studio movie". Following the disappointing critical and financial performance of Justice League (2017), Walter Hamada replaced Jon Berg as the head of DC-based film production at Warner Bros. Hamada sorted through the various DC films in development, canceling some while advancing work on others. The Joker film was expected to begin filming in late 2018 with a budget of $55 million, "a fraction" of the usual budget for a comic book-based film. The deal with Phoenix was finalized in July 2018.

On July 10, 2018, immediately after Phoenix was cast, Warner Bros. officially green-lit the film and titled it Joker. Warner Bros. described the film as "an exploration of a man disregarded by society is not only a gritty character study, but also a broader cautionary tale". At this point, Scorsese left the project because of other obligations and Emma Tillinger Koskoff replaced him, although he was later revealed to be an executive producer. It was also confirmed that the film would have no effect on Jared Leto's portrayal of the Joker in the DCEU and it was expected to be the first in a new series of DC films unrelated to that franchise. Warner Bros. was also "possibly" aiming for an R-rating from the Motion Picture Association of America.[36]

The same month, Robert De Niro and Zazie Beetz were being eyed for supporting roles. Beetz was cast, and De Niro entered negotiations a month later. Frances McDormand declined an offer to portray the mother of the Joker, and Frances Conroy was in talks for the role. At the end of July, Marc Maron also joined the cast, and Bryan Callen was cast as a comedian. Alec Baldwin was cast as Thomas Wayne on August 27, but dropped out two days later due to scheduling conflicts. Production began on September 2, 2018.

Principal photography commenced on September 10, 2018 in Los Angeles and New York City, under the working title Romeo. Shortly after filming began, De Niro, Brett Cullen, Shea Whigham, Glenn Fleshler, Bill Camp, Josh Pais, and Douglas Hodge were announced to have joined the film, with Cullen replacing Baldwin. Bradley Cooper also joined the film as a producer. The director of photography was Lawrence Sher, with whom Phillips had previously collaborated with for his Hangover films. On September 22, a scene depicting a violent protest took place in Brooklyn, although the station was modified to look like Bedford Park Blvd. In late September 2018, filming of robbery scenes took place at the First Central Savings Bank in Astoria, Queens.

Production moved to New Jersey afterward. Filming in Jersey City started on September 30 and shut down Newark Avenue, while filming in November (starting on November 9) shut down Kennedy Boulevard. Filming in Newark began on October 13 and lasted until October 16. Shortly before filming in Newark began, SAG-AFTRA received a complaint that extras were locked in subway cars for more than three hours during filming in Brooklyn, a break violation. However, the issue was quickly resolved after a representative visited the set. In late October, Whigham said they were in "the middle" of production, adding that it was an "intense" and "incredible" experience. By mid-November, filming had moved back to New York. Filming wrapped on December 3, 2018.

Joker received a highly polarized response from critics. On Rotten Tomatoes, The film has a score of 68% based on 548 reviews with an average score of 7.2/10. However, The film received widespread acclaim from the audience.

In August 2018, Hildur Guðnadóttir was hired to compose the film's score.

On September 16, 2018, Phillips posted the first picture of Phoenix in-character on his Instagram feed. On September 21, he released test footage of Phoenix wearing clown makeup, with "Laughing" by The Guess Who accompanying the footage.

Retrieved from "https://movies.fandom.com/wiki/Joker_(2019)?oldid=213469"
Community content is available under CC-BY-SA unless otherwise noted.