Start a Wiki
watch 01:48
The Loop (Movies)
Do you like this video?
Ju-on: The Final Curse 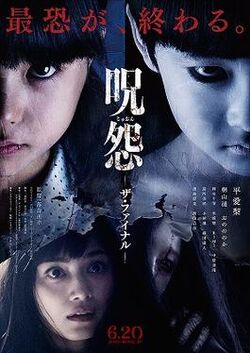 Ju-on: The Final Curse (呪怨 -ザ・ファイナル-, Ju-on -Za Fainaru-) is a 2015 Japanese supernatural horror film produced and co-written by Takashige Ichise and directed and co-written by Masayuki Ochiai. It follows the new continuity established in Ju-On: The Beginning of the End. The film was released on June 20, 2015.

Like previous films in the series, Ju-on: The Final Curse is told in an anachronistic order through eight vignettes titled after characters featured in the story. They are, in order: Mai (麻衣), Reo (玲央), Ena (絵菜), Madoka (まどか), Toshio (俊雄), Midori (碧), Sota (奏太), and Kayako (伽椰子). The synopsis presents a rough chronology of the film's plot.

Reo, a fatherless high school girl who lives with her mother, gets to live with her maternal cousin, Toshio Saeki, who has recently lost his parents. Ever since Toshio moves into her house, strange things begin to happen, including hauntings by Toshio's mother, Kayako Saeki, experienced by both Reo and her mother. Reo's friend, Midori, is disturbed after a creepy encounter with Toshio and decides to do a karaoke while mourning for her older sister, Yayoi, who went missing about a decade ago. Her karaoke screen distorts into a freakish image and when she returns from the restroom, Midori sees apparitions of Yayoi and a meowing Toshio. Yayoi then grabs Midori and kills her by throwing her upwards, making her head stuck in the ceiling. Reo's other friend, Madoka, searches about Toshio and finds the truth about the deaths of his parents, Reo's uncle Takeo, and Kayako. Just after she uploads the information to Reo, Madoka sees Toshio's ghost, who boils her from the inside.

Reo sneaks into Toshio's room and finds him motionless. When she is grabbed by another Toshio, Reo freaks out and falls down the stairs. She and her mother board themselves from Kayako, but the latter realizes that the ghosts will never let them go. She heads into the kitchen to arm herself with a knife and gets killed by Kayako. Swearing revenge, Reo heads upstairs with the knife and attempts to kill Toshio, but Kayako kills her by breaking her back.

Meanwhile, Mai Shono, a hotel staff member, is concerned about her younger sister, Yui, whom she had lost contact with since a year before. She meets apparitions of Yui who tells her that Toshio did this to her. Receiving Yui's belongings, Mai finds Yui's former teacher book and searches for Toshio's address but learns that the Saeki house has been demolished and barred from being built again by Kyosuke Takeda, who had lost his wife and sister-in-law to the curse. Mai asks Kyosuke for Reo's address but finds her house empty. Mai's boyfriend, the train station guard Sota Kitamura, questions Ena, a psychic girl living near Reo's house who had been recording Toshio's activities. Experiencing her telepathic visions, he goes to the house but is strangled by Toshio. Ending up killing him but survived, Sota becomes paranoid and is eventually killed by Kayako in his and Mai's apartment.

Deciding to end the curse, Mai arrives at Reo's house again and meets with the ghosts of Reo and her mother. They present the possessed Ena as Toshio. Seeing Toshio leaving Ena's body, Mai frantically tries to escape but is cornered by Kayako. Kayako suddenly changes into Yui, but at the last second, laughs at her sister and morphs back into Kayako, her mouth now cut and hanging wide open. The film ends with Toshio sitting at the kitchen and Mai whispering, "Help me."

Retrieved from "https://movies.fandom.com/wiki/Ju-On:_The_Final_Curse?oldid=200688"
Community content is available under CC-BY-SA unless otherwise noted.