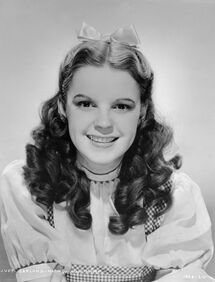 Judy Garland (June 10, 1922 – June 22, 1969), born Frances Ethel Gumm, was an American film actress considered by many to be one of the greatest singing stars of Hollywood's Golden Era of musical film. She was known for her intense acting, charming wit, and great sense of humor. Garland also excelled in the ability to depict emotion in a song, and maintain her amazingly strong, quivering voice.

At the age of 2, the young Frances Gumm made her first appearance on stage singing the chorus of Jingle Bells, as part of a trio with her two sisters under the name of the Gumm Sisters. In 1934, the sisters performed in Chicago at the Oriental Theater with George Jessel. He encouraged the group to choose a more appealing name after "Gumm" received small laughter from the audience. They settled on the Garland Sisters, and young Frances soon afterward picked the name Judy after a popular song of the day by Hoagy Carmichael. A rumor persists that Jessel came up with the last name Garland after Carole Lombard's character Lily Garland in the film Twentieth Century, which was playing at the Oriental; another rumor is that the sisters came up with the surname Garland after drama critic Robert Garland (reference: Judy: Beyond the Rainbow, A&E/Biography television special), though Lorna Luft stated in her book Me and My Shadows that her mother chose the name when Jessel announced that the trio of singers looked prettier than a Garland of flowers.

In 1935, at the age of 13, Garland was signed to a contract with MGM. Garland's first notice by studio executives came after singing "You Made Me Love You" to Clark Gable at a birthday party held by the studio for the King of Hollywood. Her rendition proved so popular that MGM placed Garland and the song in their all-star extravaganza Broadway Melody of 1938 (1937).

After a string of minor roles, at the age of 16 she landed the role of "Dorothy" in the MGM film The Wizard of Oz, and has been associated ever since with the song "Over the Rainbow." She received an honorary Academy Award for her performance in the film. After Oz, Garland became one of MGM's most bankable stars, proving particularly popular when teamed with her longtime friend Mickey Rooney in a string of "let's put on a show!" musicals. The duo first appeared together in the 1937 b-movie Thoroughbreds Don't Cry. They became a sensation and they teamed up again in Love Finds Andy Hardy, and then soon after in Babes in Arms. Garland eventually would star with Rooney in nine films.

To keep up with the frantic pace of making one movie after another, Garland, Rooney, and other young performers were constantly given amphetamines, as well as barbiturates to take before bedtime (reference: "Judy Garland: By Myself" in the American Masters series on PBS). For Garland, this constant dose of drugs would lead to addiction and a lifelong struggle, as well as her eventual demise. In her later life, she would resent the hectic work and she felt that her youth was stolen from her by MGM. She was plagued with self-doubt throughout her life and needed constant reassurance that she was talented, despite her ability to fill concert halls with fans eager to hear her, high critical praise, and several awards.

Throughout the 1940s, Garland's films increased in popularity, making her the most critically and financially successful female musical star of the time. She was given the lead in For Me and My Gal (1942), in which she was top billed over the credits for the first time. She made the direct transition from the girl next door to an adult actress. One of her most successful films for MGM is the 1944 classic Meet Me in St. Louis, in which she introduced three standards: "The Trolley Song," "The Boy Next Door," and "Have Yourself a Merry Little Christmas." The Clock (1945) was her first straight dramatic film opposite Robert Walker. Though the film was critically praised and did earn a profit, most movie fans expected her to sing. Therefore, it would be many years before she acted again in a non-singing dramatic role. Nevertheless, The Clock has become increasingly popular among Garland fans and is considered to be a true war/romance classic.

Garland's other famous films of the 1940s include The Harvey Girls (1946) (in which she introduced "On the Atchison, Topeka and the Santa Fe"), The Pirate, and Easter Parade (both 1948).

In September 1945, Garland married MGM director Vincente Minnelli and, in March 1946, Garland gave birth to a daughter, Liza. Soon afterward, the hectic work schedule and the exhausting motion picture business began to take its toll on Garland as she returned to MGM, which led to several days' absence from the studio over the next four years as well as numerous incidents; in April 1947, during filming for The Pirate, Garland suffered a nervous breakdown and had to be led away from the set. After this, Garland had a number of other breakdowns that would lead to her departure from MGM; it would also reveal the emotional turmoil that Garland suffered. Two months later, Garland made her first suicide attempt.

End of an era

Garland's relationship with MGM crumbled as the 1950s began. She was originally cast in The Barkleys of Broadway (1949) with Fred Astaire, after the success of Easter Parade. Garland, after missing rehearsals, was suspended by MGM and replaced by Ginger Rogers; she then managed to complete In the Good Old Summertime (1949) with Van Johnson (Garland's 2-year-old daughter Liza Minnelli makes a cameo at the end of this picture).

Garland was signed to appear as Annie Oakley in Annie Get Your Gun (1950), but the film put much strain on her health. After completing two musical numbers, she was fired from the film and replaced by Betty Hutton. Garland then completed Summer Stock alongside Gene Kelly, produced by Joe Pasternak and his secondary musical unit (which wasn't as high-powered as the Arthur Freed Unit). Her performance of "Get Happy" in Summer Stock - dressed in the top half of a man's tuxedo, fedora, and black leotard - became another Garland milestone. When June Allyson became pregnant during the filming of Royal Wedding, Garland was her replacement, but was dropped from the film and immediately put on suspension after she canceled a rehearsal call. She was eventually replaced by Jane Powell.

In June 1950, Garland cut her throat with a piece of glass. Although the cut was superficial, the newspapers glorified the story, and Garland was visited by many well-known celebrities who tried to bring up her spirits. Although many state that it was a suicide attempt, it was more likely a cry for help.

Renewed stardom on the stage and television

Garland turned to live concert appearances and appeared on various television specials in the early 50s. In 1951, Garland divorced Vincente Minnelli and married Sid Luft, her manager at the time, the next year. In 1953, a daughter, Lorna Luft, was born.

In 1954, she made a notable cinema comeback for Warner Bros. with A Star is Born, and was nominated for Best Actress. This film is considered by many critics to be her finest performance. Directed by George Cukor and produced by her husband Sid Luft (through Garland and Luft's Transcona Enterprises), it was a large undertaking in which Garland fully immersed herself. It was also a physically demanding role that had Garland on edge and constantly worried. Upon its release, the film was cut by almost 30 minutes amid fears it was too long. Though Garland was believed to be the most likely winner for Best Actress, the Oscar went to Grace Kelly for The Country Girl (1954). Many fans hold that Garland was "robbed" of her Oscar, and should have won the award.

Although she made no other films in the 1950s, Garland's films after A Star is Born include Judgment at Nuremberg (1961) (for which she was nominated for Best Actress in a Supporting Role), the animated feature, Gay Purr-ee (1962), A Child is Waiting (1963), co-starring Burt Lancaster, and her final film entitled I Could Go On Singing (1963), which mirrored her own life in the story of a fading singing star.

In November 1959, Garland was diagnosed with hepatitis and told that she "would never sing again." However, Garland successfully returned to both films and television; her concert appearance at Carnegie Hall on April 23, 1961, was a considerable highlight, called by many the "greatest single night in show business." The 2-record live recording made of the concert was a best-seller (certified gold), charting for 73 weeks on Billboard (13 weeks at number one), and won five Grammy Awards including Album of the Year and Best Female Vocal of the Year. The album has never been out of print.

After hugely successful television specials and guest appearances in the early 1960s, CBS made a $24 million offer to Garland for a weekly television series of her own, The Judy Garland Show, which was deemed at the time in the press to be "the biggest talent deal in TV history." The television series was critically praised, but, for a variety of reasons, including the fact it was placed in the same time slot as Bonanza, lasted only one season, and went off the air in 1964, after 26 episodes. Despite this, the show won four Emmy nominations and included amazing performances by Garland as well as some of her best vocal work. The demise of the series was personally and financially devastating for Garland, and she never fully recovered from its failure.

With the demise of her television series, Garland returned to the stage and made various television appearances. Most notably, she performed at the London Palladium with her then 17-year-old daughter Liza Minnelli in November 1964. The concert, which was also filmed for television, was one of Garland's final appearances at the venue. Garland, having divorced Sid Luft, continued to make concert appearances and also appeared on television specials. She made guest appearances on the The Ed Sullivan Show, The Tonight Show, The Hollywood Palace, The Merv Griffin Show (in which she guest-hosted an episode) and many others.

In February 1967, Garland was signed to appear as "Helen Lawson" in Valley of the Dolls for 20th Century Fox. However, she missed many wardrobe tests and rehearsals and was fired the next month. She was replaced by Susan Hayward. Returning to the stage, Garland made her last appearances at the Palace Theater in July, a sixteen-show tour, performing with her children Lorna and Joey Luft.

By early 1969, Garland's health had fallen rapidly and she made her last concert appearance in Copenhagen, Denmark.

The shortcomings of Garland's childhood years became more apparent as she struggled to overcome various personal problems, including weight gain and serious drug addiction. She was found dead in her bathroom by her last husband, Mickey Deans, on June 22, 1969. The stated exact cause of death by coroner Gavin Thursdon was accidental overdose of barbiturates; pathologist Dr. R. Pocock found 4.9 mg of Seconal in Garland's blood. Garland had turned 47 two weeks prior to her death. She was residing in a rented flat with her husband in the Chelsea section of London at the time of her death.

Upon Garland's death, The Wizard of Oz co-star Ray Bolger commented: "She just plain wore out."

Garland is interred in Ferncliff Cemetery, in Hartsdale, New York.