Start a Wiki
watch 16:45
The Loop (Movies)
Do you like this video?
Julia Roberts 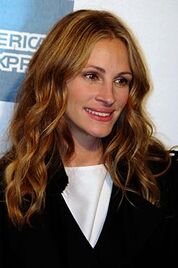 Julia Roberts is an American actress. She notably won the Academy Award for Best Actress. She is also one of the top earning women in the country, and she is also the aunt of actress Emma Roberts.

Julia Robert's first film role was in the film Satisfaction in 1987. In 1989, she famously starred in Steel Magnolias. She gained a great deal of acclaim in 1990 when she starred as Vivian Ward in the film Pretty Woman. In 2001, she received the Academy Award for Best Actress for her role in Erin Brokovich. She has also produced some of the American Girl films. She will soon be starring as the evil queen in the film Mirror, Mirror.

Retrieved from "https://movies.fandom.com/wiki/Julia_Roberts?oldid=72577"
Community content is available under CC-BY-SA unless otherwise noted.