Jumanji: The Next Level

View src
watch 01:33
House of the Dragon Trailer - The Loop
Do you like this video?
Play Sound
Jumanji: The Next Level 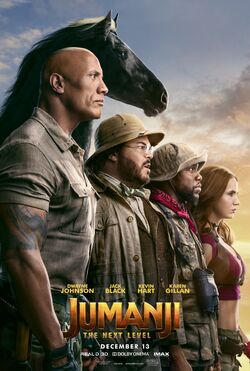 The film serves as a sequel to the 2017 film Jumanji: Welcome to the Jungle and is the third overall entry in the Jumanji franchise. It was released in the United States on December 13, 2019 by Sony Pictures Releasing.

Unknown to his friends, Spencer kept the pieces of the Jumanji video game, and one day worked to repair the system in the basement of his grandfather's house. When Spencer's friends arrive, they find Spencer missing and the game running, and decide to re-enter Jumanji to save him. Spencer's grandfather, Eddie, and his friend, Milo Walker, hear the commotion, and inadvertently get sucked into the game too. The teenaged friends must help Eddie and Milo get used to their in-game avatars and get their help to find Spencer and escape Jumanji again.