Jurassic Park III is a 2001 American science fiction adventure film and the third of the Jurassic Park franchise. It is the only film in the series that was neither directed by Steven Spielberg (though produced by his production company, Amblin Entertainment) nor based on a book by Michael Crichton, though numerous scenes in the film were ultimately taken from Crichton's original novels, Jurassic Park and The Lost World. The film takes place on Isla Sorna, the island from the second film, after a divorced couple tricks Dr. Alan Grant into helping them find their son.

After the success of Jurassic Park, Joe Johnston asked Spielberg if he could direct the film adaptation of The Lost World. While Spielberg wanted to do the project, he promised to give the helm of the next sequel to Johnston, if there were to be one. Spielberg stayed involved with the film by becoming the executive producer. Three years after the release of The Lost World, the third film's production began in August 2000.

Incidents surrounding Isla Sorna don't deter tourists Ben Hildebrand and Eric Kirby from para sailing around the island despite warnings, but when their boat crashes, Ben cuts them from their line and they go sailing into the wilderness.

Meanwhile, Dr. Alan Grant has become famous from his survival and reporting of his discoveries on Isla Nublar, and Ellie Sattler, never marrying Alan, is married to lawyer Mark Delger and has a son Charlie, who calls Alan "The Dinosaur Man." One afternoon, Alan's assistant Billy is able to replicate the larynx of a Velociraptor which he says indicates raptors are far more intelligent than Alan and Billy had previously been led to believe. Being approached by a couple Paul and Amanda Kirby, who offer full funding for their dig, Alan hesitantly agrees to give them an aerial tour of Isla Sorna, and Billy attends. With the Kirbys' associates, Udesky, Cooper and their pilot Nash, Alan learns that they plan to land on the island. When Alan objects, he is knocked out by Cooper, only to awaken to the sound of Amanda calling out to someone on the island using a bullhorn. This attracts a Spinosaurus and Cooper manages to lead it into the path of the plane before he is devoured. The plane then crashes into a tree and the Spinosaurus attacks the plane, killing Nash. The Spinosaurus soon leaves and the others escape. As they continue to escape, a Tyrannosaurus appears and the humans escape in the fray before the Spinosaurus manages to snap the T. rex's neck. After finding Ben's remains in a para sail trapped in a tree and seeing a video of his and Eric's final descent onto the island, the Kirbys explain they're actually a divorced couple looking for their son, Eric. Their fortune is fake, and Alan's grim perspective of Eric's fate paints a sad portrait; Udesky and Grant become separated from the others when they're attacked by Velociraptors and Udesky is killed by them after being used as live bait, proving their intelligence. Alan is rescued by Eric, who has managed to survive for several weeks in an overturned supply truck, clearly impressing Alan. Eric recognizes the sound of his father's satellite phone which was lost when Nash was eaten; they're reunited with the Kirbys and Billy before the Spinosaurus attacks again. Narrowly escaping, they make their way to the site compound in the hopes of finding communications equipment, but find nothing but broken test tubes and shut down equipment.

Billy becomes possessive of his satchel, and when Alan looks he realizes Billy had taken two eggs from the raptors' nest to fund for their dig, explaining the reason they were being attacked. Alan berates Billy for his careless behavior, comparing him to nothing more than InGen. They make their way to a large outdoor complex which turns out to be a bird cage for a Pteranodon which attack the group and separates Eric, taking him to be eaten by their young. Billy uses the remnants of Ben's para sail and rescues Eric, shortly before he falls into the river below, then is attacked and nearly killed by a group of Pteranodons. The group find their way out of the cage and make their way up river using a small boat, soon retrieving the satellite phone from the deposit left by the Spinosaurus. It attacks and capsizes the boat as Alan is trying to contact Ellie, but he manages to tell her "The River, Site B" before he's disconnected. Alan and Paul manage to drive off the Spinosaurus and they start making their way toward the shoreline. Close to their goal, they're surrounded by raptors who see Amanda as a female and a threat to their clutch. Using Billy's resonant chamber replica, they manage to communicate with the raptors and Amanda returns the stolen eggs before they're startled off by the sounds of helicopters. Returning to the beach, they find that Ellie had called in the U.S. Marine Corps and the U.S. Navy to rescue them. And they discover that Billy, while badly wounded, is still alive. As they depart the island, they see the Pteranodon group that had escaped from their cage after the humans are now flying free, and Alan recounts that it's time for them to find their place in the world again. 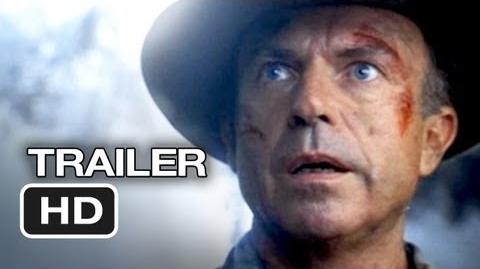