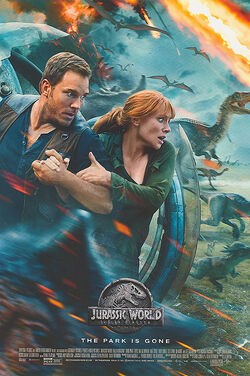 The film is a sequel to 2015's Jurassic World, and also serves as the fifth entry in the Jurassic Park film series.

Claire arrives at Lockwood and is greeted first by the housemaid Iris (Geraldine Chaplin), the house owner Benjamin Lockwood (James Cromwell), and his younger assistant Eli Mills (Rafe Spall), who all tell her of Mill's intentions of rescuing the dinosaurs on Isla Nublar, by transporting them to a safer place. Maisie then sees Eli Mills confering with a renowned auctioneer called Gunnar Eversol (Toby Jones). Two mercenaries then appear and block Owen, Claire, and Maisie from escaping. Mills appears aswell. He then reveals to them that Maisie is actually a bionic re-creation of the late Benjamin LockWood's deceased granddaughter. This frightens her and Eli escapes before Owen could get him. Eli narrowly avoids getting trampled to death by the dinosaurs while the two mercs are killed, one of them being dropped onto the transport van. The dinosaurs trample the van, burrying Mills into the ground. Once the dinosaurs have vanished, Eli resurfaces a disheveled mess. He sees the Indominous Rex bone and goes to retrieve it, but is mauled to death by the stowaway t-rex. A carnotaurus appears too and they fight over his remains, with one of them tearing his leg off. The t-rex leaves and destroys the bone in the process. With Eli Mills, Gunnar Eversol, Ken Wheatley, and the Indoraptor all dead, and the bone sample destroyed, everyone who survived the disaster are now safe. As the heroes leave the damaged mansion, they see Blue the velociraptor, who instantly runs away upon seeing them.

Retrieved from "https://movies.fandom.com/wiki/Jurassic_World:_Fallen_Kingdom?oldid=298078"
Community content is available under CC-BY-SA unless otherwise noted.