watch 00:59
The Loop (Movies)
Do you like this video?
Justice League: Throne of Atlantis 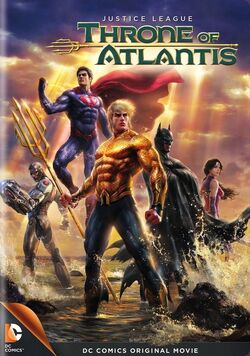 While on patrol in the Atlantic, the entire crew of the nuclear submarine USS California is killed by an unknown attacker. At S.T.A.R. Labs' Justice League headquarters, Cyborg is given the news by Colonel Steve Trevor. He teleports to the sub via a Boom tube, finds hand prints on the hull and discovers that nuclear missiles are missing. Cyborg, Flash, Shazam, Superman, Wonder Woman, Green Lantern, and Batman inspect the recovered California. Diana identifies the enemy as warriors from Atlantis, beings turned into underwater creatures by their king's mystical trident. Superman and Batman decide to meet Atlantis-expert Stephen Shin.

In Atlantis, Prince Orm and Black Manta meet with Orm's mother, Queen Atlanna, where they argue over declaring war on the humans. Orm blames the Justice League for his father's death, while Queen Atlanna blames Darkseid. Orm wishes to attack first, but Atlanna silences him and asks Queen Mera to bring Arthur Curry (her other son) to Atlantis. Black Manta uses a craft disguised as a US Navy submarine to attack Atlantis using the stolen missiles to frame the humans. Batman and Superman locate Shin's home and his destroyed research. Superman finds a photograph of Curry and a letter revealing Arthur is half-Atlantean. Shin meets Arthur but he is killed by Atlantean soldiers sent by Black Manta. Arthur is blasted out of his collapsing house; Mera saves him and dispatches the soldiers using her hydrokinetic powers.

Citizens of Atlantis and Orm demand war following the attack on Atlantis, though Atlanna disagrees. Arthur wakes up with gills on his neck in underwater Atlantean ruins. Mera explains that Atlanna is his mother, though as a royal, Atlanna could not be with his father or Arthur. Now, Atlanna believes Arthur can help bridge the gap between the two worlds. Mera dresses him in the king's royal garb, though Arthur leaves wearing only the orange and green Atlantean bodysuit. They are attacked by the Trench at the surface. The creatures overwhelm Arthur and the League helps defeat the Trenchers. Black Manta reports to Orm that the Trench failed to kill Arthur.

When Orm and Atlanna argue over starting a war, she reveals that she knows he attacked Atlantis. Orm stabs her to death from behind, and takes over as the new king of Atlantis. Arthur, Mera, Superman, Wonder Woman, and Green Lantern learn of Atlanna's death once in Atlantis. Orm (now using the mantle "Ocean Master") uses the trident to restrain the team in pods. The group is sent to be consumed by the monstrous Dark Trench, while Ocean Master leads Atlantis' army to the surface. Arthur taps into the power of the trident to destroy his pod, and with Superman's help, they save the rest and defeat the monster. A massive tidal wave conceals the Atlantean army's arrival in Metropolis. Superman saves John Henry Irons, and Wonder Woman saves Lois Lane and Jimmy Olsen. Black Manta attacks Arthur and reveals that he wants to overthrow Ocean Master to take Atlantis for himself. Arthur summons a shark to attack him.

Mera and the League battle Ocean Master, with little success. Shazam is transformed back into Billy Batson; Mera, Flash, and Green Lantern are knocked unconscious; and Cyborg is impaled, electrocuted and disabled. Wonder Woman is incapacitated by the trident's electric energy, while Superman is wounded because of its mystical properties. Batman saves Cyborg from dying by electrocuting him with a taser device. Ocean Master nearly kills Arthur as Cyborg broadcasts the video of Ocean Master confessing to his mother's murder for Atlantis' soldiers to hear. Arthur uses the distraction to defeat Ocean Master and convince the soldiers to stand down.

Arthur is crowned king of Atlantis with the Justice League in the audience. Batman suggests that they need to solidify the team, given the new threats, and Cyborg reveals plans for a watchtower. Arthur joins the League as Aquaman, despite his dislike toward the name, before leaving with Mera to confront the Trenchers. In the post-credits, Orm is incarcerated at Belle Reve where he is approached by Lex Luthor, who has a proposition for him to consider.

Retrieved from "https://movies.fandom.com/wiki/Justice_League:_Throne_of_Atlantis?oldid=183302"
Community content is available under CC-BY-SA unless otherwise noted.