Start a Wiki
watch 01:27
The Loop (Movies)
Do you like this video?
Justin Lin 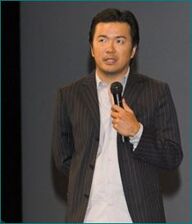 Justin Lin is is a Taiwanese-born American film director whose films have grossed $2 billion worldwide. He is best known for his work on Better Luck Tomorrow, The Fast and the Furious franchise and the television show Community.

Lin was born in Taipei, Taiwan, and grew up in a working-class neighborhood in Orange County, California. He attended University of California, San Diego for two years before transferring to UCLA, where he earned an MFA in film directing from the UCLA Film School.

Shopping for Fangs was Justin Lin's first feature film, which he co-directed with fellow UCLA Film School alumnus, Quentin Lee when they were still at UCLA. The film stars John Cho and is considered to be a "cult classic" amongst independent Asian American films.

Lin's solo directorial debut was Better Luck Tomorrow. The film premiered at the Sundance Film Festival in 2002. In a question and answer session following a festival screening, and in response to an audience member who asked director Lin if he thought it was irresponsible to portray Asian-Americans in such a negative light, Roger Ebert stood up and said, angrily, "You wouldn't say that to a white filmmaker". Ebert's approval of the film drew the attention of major studios, leading eventually to MTV Films buying the film for distribution, making it MTV Films very first acquisition. The film was also an official selection of the 2002 Toronto International Film Festival, and was also nominated for a Grand Jury Prize at 2002 Sundance and the John Cassavetes Award at the 2004 Independent Spirit Awards. The film arguably launched Lin's career into directing larger budget films, and Variety magazine also named him one of the "Top 10 Directors to Watch" in 2002.

His second feature film (and first film to be produced and distributed by a large studio, Touchstone Pictures) was Annapolis, which starred James Franco, Tyrese Gibson, Donnie Wahlberg, and Jordana Brewster. The film cost $26 million to make, but it only ended up grossing $17 million worldwide.

His third feature film, The Fast and the Furious: Tokyo Drift, was released in North American cinemas on June 16, 2006. Despite mixed reviews, Tokyo Drift brought in over $24 million on its opening weekend. As of January 28, 2007, the domestic box office take has totalled $62,514,415 with another $95,953,877 from the foreign box office, resulting in total receipts of $158,468,292. With Tokyo Drift, Lin would establish his reputation as the director of all the succeeding The Fast and the Furious films in the franchise. He was initially approached to direct the film after the success of Better Luck Tomorrow at Sundance and after wrapping his first studio film Annapolis, but merely wanted some "conditions," as the script was about "cars drifting around Buddhist statues and geisha girls." Instead, Lin wanted to make a film that about Japan, which was "much more postmodern" as he mentioned, and intended to do a film on a more global scale that went against preconceived stereotypes.

Lin continued to direct the films of the series with its sixth installment, Fast & Furious 6. It became the largest Memorial Day Weekend gross for a Universal movie ever (a record $120 million for a worldwide total of $317 million), also nearly doubling the gross of The Hangover Part III. It also became the highest grossing Universal Pictures movie in the UK. The film's opening weekend gross in the UK was the largest out of any other of the series. Specifically in the UK, the film took $4.4 million during its opening day from 462 screens, the biggest opening day for both The Fast and the Furious franchise and Universal in that market, the second-highest opening of 2013 behind Iron Man 3 ($4.7 million), and the number 1 film of the day with 54% of the market. In the UK, the film also finished as the number one film of the weekend, taking a total of $13.8 million; this figure made it the biggest opening for the franchise, Universal, a Vin Diesel or Dwayne Johnson film, and the second-biggest opening of 2013 again behind Iron Man 3 ($17.6 million). The film has also performed relatively well critically: for instance, on Metacritic, it has "generally favorable reviews" and on Rotten Tomatoes the film scores higher than a 73% with a 95% audience approval rating. Lin will be directing the fifth film in the Bourne series.

Retrieved from "https://movies.fandom.com/wiki/Justin_Lin?oldid=72350"
Community content is available under CC-BY-SA unless otherwise noted.