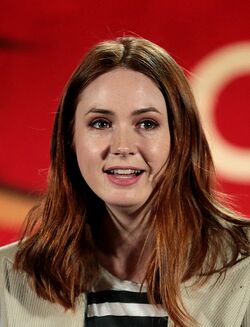 Karen Gillan (born November 28, 1987) is a Scottish actress and former model, best known for her role as Amy Pond in the BBC science-fiction series Doctor Who (2010–12). In film, she has starred as Jane Lockhart in Not Another Happy Ending (2013), Kaylie Russell in the horror film Oculus (2013), and Nebula in the Marvel film Guardians of the Galaxy (2014).