Start a Wiki
watch 01:48
The Loop (Movies)
Do you like this video?
Katy Perry: Part of Me 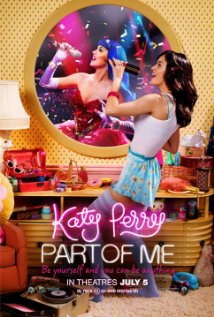 Be Yourself and You Can Be Anything
Directed By
Dan Cutforth, Jane Lipsitz
Cast
Katy Perry, Lucas Kerr, Rachael Markarian
Distributed By
Paramount Pictures
Country
US
Language
English
Release Date
July 5, 2012

Katy Perry: Part of Me is a 3D documentary that chronicles the pop star's life on and off-stage.

It was directed by Dan Cutforth & Jane Lipsitz and released on July 5, 2012 in theaters.

"Katy Perry: All of Me" features interviews with Katy Perry and her loved ones documenting the trajectory of her life, containing various clips from her childhood and teenage years as well as her career and personal life (ranging from December 1999 to March 2012). It also includes scenes of Perry dealing with the breakdown of her then-marriage to English actor/comedian Russell Brand.

It is also spliced with performances from Perry's worldwide "California Dreams Tour" (which had 127 concerts from February 20, 2011 to January 22, 2012). Most of the performances were recorded on November 23, 2011, at the Staples Center in Los Angeles, but also included performances in Tokyo and São Paulo.

Some of Perry's friends such as Rihanna, Lady Gaga, Adele, and Jessie J make cameos in the film.

Being a documentary, everyone in this film plays themselves.

On March 7, 2012, Katy Perry announced on Twitter that she and Paramount Pictures would release a part-biopic, part-concert film entitled "Katy Perry: Part of Me" in mid-2012.

She told MTV News that the film was the closing to the "Teenage Dream" era & explained what to expect, stating, "It's closing the chapter on Teenage Dream, but it's giving you such an inside perspective..... This film, you're going to see it from my best friend/buddy perspective, you're going to see exactly what I mean and feel and think about everything." One golden ticket to the movie premiere was placed in a random physical copy of Perry's album "Teenage Dream: The Complete Confection."

The first movie trailer was aired during the 2012 Nickelodeon Kids' Choice Awards and on March 31, 2012, Perry announced via Twitter that the film would be released during the weekend of July 4, 2012.

On April 2, 2012,a trailer for the movie was released on iTunes Stores worldwide.

Perry teamed up with Pepsi to promote the film.

The partnership included co-branded television and radio spots, digital advertising and retail displays. All elements of the campaign featured Pepsi's new global tag line, "Live for Now". The campaign offered consumers the chance to win trips to attend the world premiere of the film in Los Angeles, which included a live performance by Perry.

Perry held and attended premieres in Sydney, Australia and London, England where she walked the "Pink Carpet". On July 30, 2012, there was a premiere in Rio de Janeiro, Brazil with the presence of Perry.

Rotten Tomatoes reported that 76% of critics gave the film positive reviews, based on 87 reviews with a rating average of 6.4 out of 10.

According to its critical consensus, it stated: "Katy Perry: Part of Me succeeds on the strengths of the pop star's genuine likability, inspiring work ethic, and dazzling stage show, even if it plays somewhat like a PR puff piece at times."

Metacritic (which assigns a normalized rating out of 100 to reviews from mainstream critics) the film has received a rating average of 57 based on 24 reviews which indicates mixed to average reviews.

Audiences polled by the market research firm CinemaScore gave Katy Perry: Part of Me an "A" grade on average.

Neil Smith of Total Film stated: "Despite being as garish and manufactured as Perry's multi-coloured hair-don'ts, Part of Me deserves kudos for allowing an element of unpredictability to intrude upon its tween exploitation and sugary vulgarity."

Elizabeth Weitzman of New York Daily News said: "Perry may be the world's most high-profile tease, but she sure knows how to show us a good time".

Andrew McMurty of Filmink stated: "Ultimately, Part of Me is for fans, but it should have interest for people interested in celebrity culture".

Alison Willmore of Time Out New York also gave the film a generally negative review, saying, "the 3-D performance footage is impressively lavish, though the film's unending idolization of the amiable singer will quickly exhaust all but the most devoted fans".

Retrieved from "https://movies.fandom.com/wiki/Katy_Perry:_Part_of_Me?oldid=150260"
Community content is available under CC-BY-SA unless otherwise noted.