View src
watch 01:33
House of the Dragon Trailer - The Loop
Do you like this video?
Play Sound
Keanu 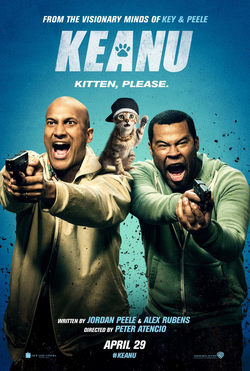 Keanu is a 2016 American action comedy film directed by Peter Atencio and written by Jordan Peele and Alex Rubens. The film stars Keegan-Michael Key, Jordan Peele, Method Man, Nia Long and Will Forte. The film premiered at the South by Southwest Festival on March 13, 2016, and was released in North America by Warner Bros. on April 29, 2016.

Recently dumped by his girlfriend, slacker Rell (Jordan Peele) finds some happiness when a cute kitten winds up on his doorstep. After a heartless thief steals the cat, Rell recruits his cousin Clarence (Keegan-Michael Key) to help him retrieve it. They soon learn that a thug named Cheddar (Method Man) has the animal, and he'll only give it back if the two men agree to work for him. Armed with guns and a gangster attitude, it doesn't take long for the hapless duo to land in big trouble.