Start a Wiki
watch 01:28
The Loop (Movies)
Do you like this video?
Keanu Reeves 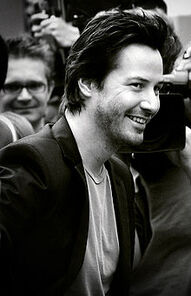 Keanu Reeves is a Canadian actor, best known for his starring role in the film, The Matrix.

Reeves began acting as a child in theater productions. His first film was Letting Go in 1981, where he was uncredited. He became well known in the early 1990s for his role in the film, Bill and Ted's Excellent Adventure, in which he played a spaced-out teenage boy.

In the early 1990s, he broke out of his role as a teenage boy and began taking on more serious roles, such as his starring role in the film, Point Break. In 1994, he gained critical acclaim for starring in the film, Speed. In 2001, he starred in the blockbuster, The Matrix, earning monumental fame. In the mid-2000s he had several less-famous roles in smaller films, and in 2011, he announced that there will be a third installment of Bill and Ted's Excellent Adventures.

Retrieved from "https://movies.fandom.com/wiki/Keanu_Reeves?oldid=128857"
Community content is available under CC-BY-SA unless otherwise noted.