Start a Wiki
watch 01:27
The Loop (Movies)
Do you like this video?
Kellan Lutz 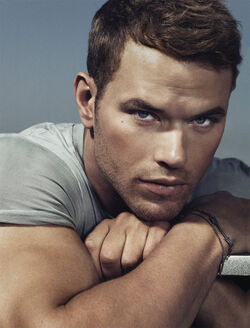 Kellan Christopher Lutz is an American fashion model and actor for television and films, who is best known for playing Emmett Cullen in the Twilight Saga film series.

Lutz has one sister and six brothers. He was born in Dickinson, North Dakota, and was raised throughout North Dakota, the Midwest, and Arizona. After graduating from high school he moved to California to attend Chapman University for chemical engineering, but later decided to pursue an acting career instead.dmc devil may cry ji chang wook

Lutz has acted on a number of television shows. He had recurring roles on Model Citizens and The Comeback, and smaller roles in episodes of The Bold and the Beautiful, CSI: NY, Summerland, Six Feet Under, CSI: Crime Scene Investigation, and Heroes. He was also in the films Stick It, Accepted, and Prom Night. Additionally, Lutz has performed on the California stage and was the host of Bravo's Blow Out. He also appeared in the 2006 commercial for Hilary Duff's fragrance With Love... Hilary Duff, and in the 2007 music video for her single, "With Love". In 2008, he appeared in another music video, Hinder's "Without You". In the same year, Lutz also appeared in the miniseries Generation Kill, based on the book by Evan Wright.

Lutz played Emmett Cullen in the film adaptations of the Twilight saga by Stephenie Meyer and reprised his role for the sequel, released in November 2009. He also appeared as George Evans in the 90210 spinoff on The CW. Lutz reunited with his Twilight co-star and close friend, Ashley Greene, in the film A Warrior's Heart. Lutz also appeared in A Nightmare on Elm Street as Dean, "a well-liked, well-off high school jock", in April 2010, and as the feisty Poseidon, God of the Sea in Immortals (2011). He was considered for the lead role in Conan the Barbarian but eventually lost out to Jason Momoa.

In 2011, together with Mickey Rourke, Kellan Lutz is starring Java Heat movies in Indonesia.

Lutz is currently signed with Ford Models. He is one of the models featured in the 2010 Calvin Klein X underwear campaign.

Retrieved from "https://movies.fandom.com/wiki/Kellan_Lutz?oldid=162779"
Community content is available under CC-BY-SA unless otherwise noted.