watch 01:56
The Loop (Movies)
Do you like this video?
Play Sound
Kerry Washington 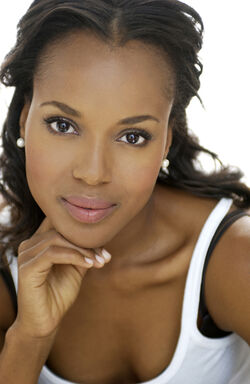 Kerry Washington is an American actress. She is known for her roles as Ray Charles's wife, Della Bea Robinson, in the film Ray (2004), as Idi Amin's wife Kay in The Last King of Scotland, and as Alicia Masters, love interest of Ben Grimm/The Thing in the live-action Fantastic Four films of 2005 and 2007.

Washington was born in the The Bronx, New York City, the daughter of Valerie, a professor and educational consultant, and a real estate broker father. She performed with the Tada theater teen group and attended the Spence School in Manhattan, graduating in 1994. She attended George Washington University, graduating in 1998 Phi Beta Kappa with a double major in Anthropology & Sociology. She also studied at Michael Howard Studios in New York City.

She is the new spokesperson for L'Oréal, appearing in commercials and ads alongside fellow actresses Scarlett Johansson and Eva Longoria, and model Doutzen Kroes.

She also co-directed and appeared in the music video for hip-hop artist Common's song, "I Want You", the fourth single from his album Finding Forever.

Washington narrated the critically acclaimed documentary about the New Orleans-based teenage TBC Brass Band, From the Mouthpiece on Back. She also appears in Maxwell's "Bad Habits" video. In 2009, Washington performed in The People Speak a documentary feature film that uses dramatic and musical performances of the letters, diaries, and speeches of everyday Americans, based on historian Howard Zinn's A People's History of the United States.

In 2010, she made her Broadway debut in David Mamet's Race, alongside James Spader, David Alan Grier, and Richard Thomas. She also appeared in Tyler Perry's 2010 film For Colored Girls.

In October 2011 it was confirmed that she would be starring in Quentin Tarantino's new film Django Unchained.

Retrieved from "https://movies.fandom.com/wiki/Kerry_Washington?oldid=40375"
Community content is available under CC-BY-SA unless otherwise noted.