watch 00:59
The Loop (Movies)
Do you like this video?
Kevin Bacon 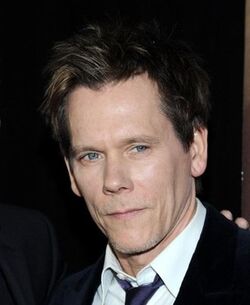 Kevin Norwood Bacon (born July 8, 1958) is an American actor and musician. He included in films such as Friday the 13th (1980), Footloose (1984), Tremors and Mystic River. Bacon has won a Golden Globe Award and three Screen Actors Guild Awards.

Bacon was born in Philadelphia, one of six children of Ruth Hilda (née Holmes) and Edmund Norwood Bacon. He won a full scholarship to and attended the Pennsylvania Governor's School for the Arts at Bucknell University.

Bacon made his acting debut in 1978 in National Lampoon's Animal House. He then had a bigger role in the slasher film Friday the 13th (1980). He went on to appear in other films such as Diner, Footloose (1984), Tremors, JFK, A Few Good Men, Apollo 13, Sleepers, Mystic River and Black Mass.

Retrieved from "https://movies.fandom.com/wiki/Kevin_Bacon?oldid=95695"
Community content is available under CC-BY-SA unless otherwise noted.