watch 03:27
Wiki Targeted (Entertainment)
Do you like this video?
Play Sound
Killer Crocodile 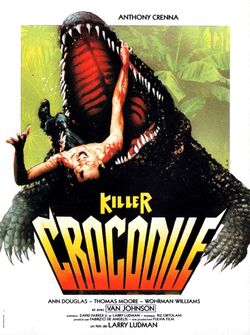 A group of friends investigating the illegal dumping of toxic chemicals in a swamp must defend themselves against an abnormally huge crocodile, which has become more aggressive than normal due to prolonged exposure to the toxic waste.

The film was shot back-to-back with its Sequel Killer Crocodile 2. It was filmed on 35mm film.

Killer Crocodile was released on DVD by X-Rated KultDVD in Germany.

Retrieved from "https://movies.fandom.com/wiki/Killer_Crocodile?oldid=73526"
Community content is available under CC-BY-SA unless otherwise noted.