watch 00:59
The Loop (Movies)
Do you like this video?
King Arthur: Legend of the Sword 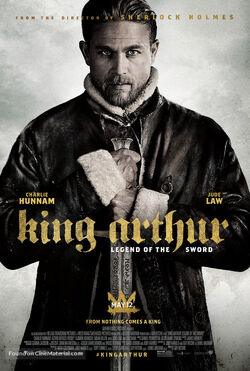 King Arthur: Legend of the Sword is a 2017 fantasy film directed by Guy Ritchie and written by Ritchie, Joby Harold and Lionel Wigram. Loosely based on Arthurian legends, the film stars Charlie Hunnam as the title character, with Àstrid Bergès-Frisbey, Djimon Hounsou, Aidan Gillen, Jude Law and Eric Bana in supporting roles.

After the murder of his father, young Arthur's (Charlie Hunnam) power-hungry uncle (Jude Law) Vortigern seizes control of the crown. Robbed of his birthright, he grows up the hard way in the back alleys of the city, not knowing who he truly is. When fate leads him to pull the Excalibur sword from stone, Arthur embraces his true destiny to become a legendary fighter and leader.

On review aggregator website Rotten Tomatoes, the film has an approval rating of 28% based on 179 reviews, and an average rating of 4.6/10. The site's critical consensus reads, "King Arthur: Legend of the Sword piles mounds of modern action flash on an age-old tale – and wipes out much of what made it a classic story in the first place." On Metacritic, which assigns a normalized rating, to film has a score 42 out of 100, based 44 critics, indicating "mixed or average reviews". On CinemaScore, audiences gave the film an average grade of "B+" on an A+ to F scale, with 56% of the opening weekend filmgoers being under the age of 35, and 59% men

Retrieved from "https://movies.fandom.com/wiki/King_Arthur:_Legend_of_the_Sword?oldid=119145"
Community content is available under CC-BY-SA unless otherwise noted.