King Kong is a 2005 epic adventure film and remake of the 1933 film of the same name. It is directed by Peter Jackson. the film stars Naomi Watts as Ann Darrow, Jack Black as Carl Denham, Adrien Brody as Jack Driscoll and, through motion capture, Andy Serkis as the title character. Serkis also played Lumpy, the galley chef on the SS Venture. Set in 1932-1933 New York City and the nightmarish Skull Island, the film tells the story of an overly ambitious filmmaker who coerces his cast and hired ship crew to travel to mysterious Skull Island, where they encounter King Kong, a legendary giant gorilla. Captured, he is displayed in New York City, with tragic results.

The film's budget climbed from an initial US$150 million to a record-breaking $207 million. The film was released on December 14, 2005, and made an opening of $50.1 million. While the film performed lower than expectations, King Kong made domestic and worldwide grosses that eventually added up to $550 million, becoming the fourth-highest grossing film in Universal Pictures history. It also generated $100 million in DVD sales upon its home video release. The film garnered generally positive reviews from film critics and appeared on several "top ten" lists for 2005, though some reviewers also criticized it for its 3 hour, 7 minute running time. It won Academy Awards for Best Sound Editing, Best Sound Mixing, and Best Visual Effects.

In the autumn of 1933, at the height of the Great Depression in New York City, Ann Darrow has lost her job as a vaudeville actress but is hired by troubled filmmaker Carl Denham to act in his new film. Ann signs on when she learns her favorite playwright, Jack Driscoll, is the screenwriter. As their tramp steamer SS Venture sails to the remote and mysterious Skull Island, Ann and Jack fall in love. Captain Englehorn begins to have second thoughts, following the fears of his crew about Skull Island and its strange creatures, whose evolutionary paths have diverged substantially from their outside counterparts. Some of these creatures present extreme examples of island gigantism. Still others are modern-day dinosaurs – on Skull Island, their ancestors somehow survived the mass-extinction of dinosaurs that affected the rest of the planet. Instead, they continued to flourish, adapt and evolve during the last 65 million years into new, often more-deadly species.

Deep in the southern seas, the Venture receives a radio message from its owners informing Englehorn about an arrest warrant for Carl and instructing him to divert to Rangoon. Despite his attempt to turn around, the ship is lost in fog and runs aground on rocks encircling Skull Island. Carl and his crew explore the island to film and are attacked by vicious natives. The sound technician and one of the sailors are killed, and Jack is knocked unconscious. Ann screams as she is captured, and a roar beyond the wall responds. The matriarch of the tribe vows to sacrifice her to "Kong", a 25 ft. (8 m) tall gorilla. Englehorn and his crew break up the attack and return to the stranded ship. They lighten their load to float off the rocks and carry out repairs to the hull, but Jack discovers Ann has been kidnapped. On the island, Ann is hung from a primitive drawbridge on the side of the wall. The crew comes armed, but is too late as Kong takes Ann into the jungle. As time passes in her captivity, Ann wins over Kong with juggling and dancing, and begins to grasp Kong's intelligence and capacity for emotion.

Englehorn organizes a rescue party led by Hayes. The rescue party is caught up in a pack of Venatosaurus saevidicus (dromaeosaur descendants, related to Velociraptors) hunting a herd of Brontosaurus baxteri (massive, plant-eating sauropods), and the cameraman is killed along with three sailors. The rest of the rescue party come across a swamp where Bruce Baxter and two others leave the group. While making their way across a giant fallen log, Kong arrives and attacks the rescue party. Hayes is killed and the rest of the crew are shaken off the log into a ravine. Kong returns to Ann and rescues her from three Vastatosaurus rex (the descendants of Tyrannosaurus rex) in a fierce and intense battle, then takes her to his mountain lair. Englehorn and the rest of the crew save what is left of the rescue party from a pit of giant insects, and as Jack continues searching for Ann, Carl decides to capture Kong. Jack goes to Kong's lair, inadvertently waking him. As Kong fights a swarm of flying Terapusmordax (bat-like rodents), Ann and Jack escape by grabbing the wing of one and then jumping into a river. They arrive at the village wall with the angry Kong following them, and Ann becomes distraught by what Carl plans to do. Kong bursts through the gate and struggles to get her back, killing several sailors, but is subdued when Carl knocks him out with Chloroform.

In New York, in the early winter of 1933, Carl presents a chained Kong, the Eighth Wonder of the World on Broadway, starring Baxter and an imprisoned Kong. Ann has become an anonymous chorus girl. Camera flashes from photographers enrage the gorilla. Kong breaks free from his chrome-steel chains. He rampages through the theater and pursues Jack in a taxi through the streets. Kong knocks him out by stopping the taxi and flipping it, then encounters Ann again. Kong and Ann share a moment on a frozen pond in Central Park until the army attacks. Kong climbs with Ann onto the dome of the Empire State Building, where he fights off a flight of six Curtiss Falcon fighter planes sent to attack him, downing three. Kong is hit by several bursts of gunfire, and gazes at Ann for the last time before dying and falling from the building. Ann is greeted by Jack as reporters gather around Kong's corpse. Carl takes a last look and says, "It wasn't the airplanes. It was Beauty killed the Beast." 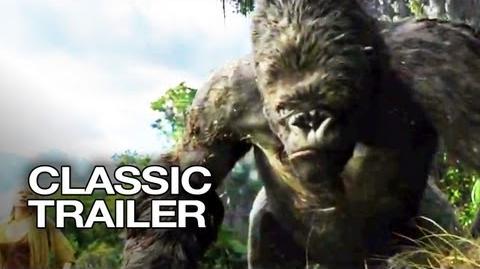